Vikings and dragons are normally archenemies. But not in our slot game Highroller Viking & Dragon™. A mighty viking has joined forces with a fire-breathing dragon to help you track down treasures across five reels and 25 win lines. There are Twists aplenty in this game, but you’ll need a little luck and some daring stakes to locate them. The most valuable symbol you will come across is the Gold Coin, for it pays the highest winnings. The Viking delivers the second-highest winnings, followed by the Hammer.

The aim of your adventure with the viking at your side and the dragon overhead is to get five identical symbols on one of 25 win lines. It’s crucial that the symbols in a winning combo are side by side without being interrupted by others. The winning patterns run from left to right. The Coin is the Wild symbol, and it can substitute for every other symbol except for the Treasure Chest (Scatter).

The Treasure Chest is your key to the Free Games in Highroller Viking & Dragon™ online: If three, four or five of them appear on the reels, you’ll win eight, twelve or 20 Free Games. All Treasure Chests in this winning combination (except the one on the far right) can win you two to five Free Games. Hidden behind the Treasure Chest on the right you’ll find a multiplier of between x2 and x5, which will multiply the number of Free Games already won.

The Extra Wilds feature can be triggered at any time in both the regular game and the Free Games, with between three and 15 Wild symbols added at random to the reels. After all of the Wilds are shown on the screen, the winnings will be paid out. This feature cannot be retriggered while it is running.

A brave viking and a crimson dragon are your companions in this slot, which is packed full of excitement and thrills. The unlikely duo are eager for you to join them on an unforgettable adventure across the reels that – with a little luck – could end with you filling your player account with Twists! 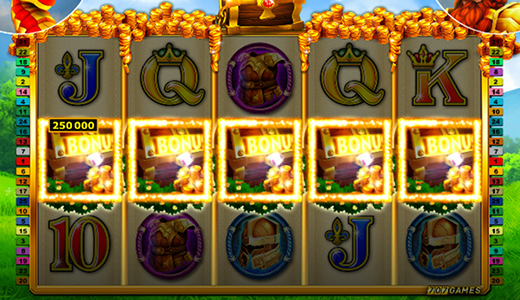