In the slot Jungle Queen™ you'll meet the warrior jungle queen on 5 reels with 20 win lines (40 in the free games). You score the highest Twist winnings with the monkey and the Scatter symbol.

Your aim with Jungle Queen™is to land 5 identical symbols along one of the win lines. All pay lines start on the first reel and end on the fifth reel.

The Scatter symbol pays a win when it lands 3, 4 or 5 times in any position on the reels regardless of the pay line course. Five free games are triggered if the jungle queen appears completely on the second, third or fourth reel. Moreover, she can act as a substitute for all other symbols except for Scatter and increase your winning odds.

Armed with bow and arrow she demands but one thing from you: respect! Since the fierce empress rules the reels of Jungle Queen™ with her fighting skills it is easy to honour her wishes. If you prove yourself worthy she will take you on a journey through tropical forests and every now and then grant you a free game. Apart from more reel positions free games boast 40 pay lines instead of the usual 20! 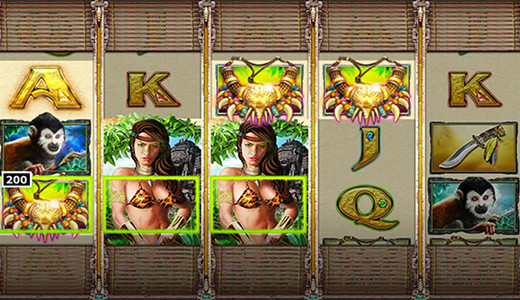