A powerful woman was in charge of ancient Babylon. The mighty Semiramis rules with an iron fist. But in our slot Riches of Babylon™, you’ll see a very different side of the fearsome leader. For if you get enough of her symbols on the reels in a single spin, she’ll be only too pleased to fill up your player account with Twists.

This slot, with five reels and 25 win lines, offers you fantastic chances to win, with a host of valuable winning symbols, two bonus games and thrilling Free Games. The most valuable symbol is Semiramis herself, followed by the Warrior and the Lion.

Your aim in Riches of Babylon™

The aim of the slot game Riches of Babylon™ online is to get three to five matching symbols on an active win line. The winning combinations always run from left to right and cannot be interrupted by other symbols. The beautiful Semiramis is the game’s Wild symbol, which means that she can substitute for all symbols except for the Babylon Bonus symbol (Scatter). The Scatter symbol pays in any position on the reels. And if you manage to get three of them in a spin, the Babylon Bonus will be triggered.

Should three Tower symbols appear in any position, the feature of the same name will begin. The different levels of the Tower of Babylon will spin like reels and determine how many Free Games (eight to 25) or multipliers (x2 to x5) you have won. If they stop on the Babylon Bonus, you can win up to 99 Free Games.

The number of Free Games you have won will be determined in the Tower feature. During the Free Games themselves, the following symbols need only appear twice in a spin to generate winnings: Semiramis, the Warrior, the Lion and the Stag. Semiramis appears on the reels in the Free Games as a stacked symbol that covers three positions. If only a part of the symbol stack is visible after a spin, the stack will slide up or down to fill the reel. No further Free Games can be triggered during the Free Games already active.

If the Ruby Sphere symbol appears, it can:

Should the Babylon Bonus counter reach 99, Free Games will be triggered automatically. If the Tower bonus game is activated by a Ruby Sphere, you can spin the Tower of Babylon to determine your multiplier.

In Riches of Babylon™, you’ll be spoilt by the many different ways to win, from the Ruby Spheres to profitable winning symbols to features that are packed with multipliers and Free Games. Simply put, your treasure hunt in ancient Babylon promises to be an exciting adventure you’ll never forget! 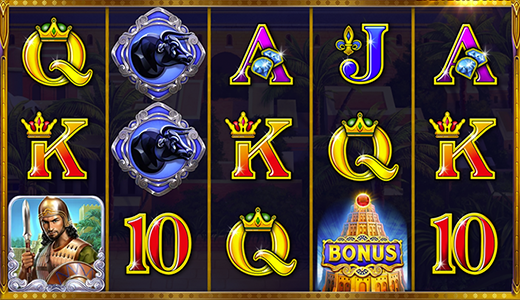