Thundering hooves, huge clouds of dust, snorting bulls and splendid chances of winning: All this is waiting for you in Rumble Rumble™! Spin the five reels with 50 win lines powerfully to make your player account tremble with Twists. If you succeed to lure the temperamental bulls into the red and blue framed boxes on the reels these will be brimming with Wild symbols. During the amazing Free Games the number of reels increases to nine. The Bull Coin symbol yields the highest wins, the Wild symbol the second-highest and the Mountain symbol the third-highest.

The aim with Rumble Rumble™

Your aim in Rumble Rumble™  online is to place the same symbol five times on all five reels. The symbols in winning combinations must land from left to right and cannot be interrupted by other symbols. The Wild symbol can substitute for all other symbols (except for the Scatter) and therefore complete symbol combinations.

Free Games are triggered by the Bull Coin symbol (Scatter). You need to line up at least three of them in any position on a win line to you bag eight Free Games. Free Games are played on giant reels. Further Free Games can be won during the Free Games.

If one of the bulls in Rumble Rumble™ gallops into the red framed square on the second reel, the reels one, two and three turn into Wild reels: All symbols on these reels change into Wilds. If a Bull symbol lights up in the red framed box on the fourth reel, all symbols on the third, fourth and fifth reel transform into Wild symbols. In both cases, Bull Coin symbols (Scatter) turn into Bull Coin Wilds.

If a Bull symbol lands in one of the blue framed boxes on the second reel, the transformation of all symbols into Wilds is triggered on this reel. The same applies for the fourth reel: A Bull symbol landing in one of the blue framed squares turns all symbols on the fourth reel into Wilds. Moreover, the Bull Coin symbols are upgraded to Bull Coin Wilds.

Your job in Rumble Rumble™ online is to tame wild bulls on the reels. Can you bravely face these ferocious creatures and collect Twists afterwards if your luck is in? Give this temperamental slot with a wealth of bonus games and winning symbols a try! 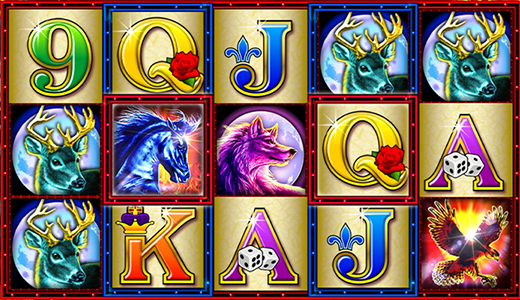