Star Supreme™ is the latest spectacular addition to the sparkling slot universe. In this game, you spin the fruits at lightspeed around five reels with 50 win lines. But it’s the Golden Star symbol that gives this slot machine its energy. If it appears in one of the highlighted positions, it will activate the bonus game in which you can get your hands on multipliers and up to 50 Free Games.

Star Supreme™ online is an exciting new take on a classic fruit machine format without complicated rules or features. It focusses on delivering fun… and it doesn’t disappoint. The Joker pays the highest winnings, followed by the Golden Star and the fiery 7 symbol.

Winnings will head your way in Star Supreme™ if you manage to get between three and five matching game symbols running from left to right along one of the win lines. The Golden Star is the Scatter symbol, which means it can generate winnings irrespective of the win lines and the position on the reels. And the Joker is the Wild, which gives him the power to substitute for every other symbol – with the exception of the Golden Star – to complete winning combinations.

Every time a Golden Star stops in one of the highlighted positions in Star Supreme™ online, the bonus game is triggered. You’ll quickly be taken to the bonus game screen, where ten Free Games will be waiting. The main feature of this bonus game is a multiplier that grows with every win you achieve. Should further Golden Stars come to rest in highlighted positions, you’ll be granted an additional ten Free Games for each one. This process can repeat itself until a maximum of 50 Free Games have been accumulated.

The Gamble feature offers you the chance to double your winnings. But you’ll have to be ready to take a risk, for you can also lose them completely. At the end of a winning spin, the Gamble button lights up. Click on it and you’ll be requested to guess the colour of the next card – red or black. If you guess correctly, your winnings will be doubled. Guess incorrectly and you’ll return to the main game empty-handed.

A fruit slot with a twist! Play Star Supreme™ and you’ll discover not only a variety of classic fruit symbols, like the Watermelon, the Grape and the Plum, but also a Joker, a Golden Star, a multiplier and Free Games. All of these combine to elevate the entertainment of a traditional fruit slot to the next level for some supreme gaming fun! 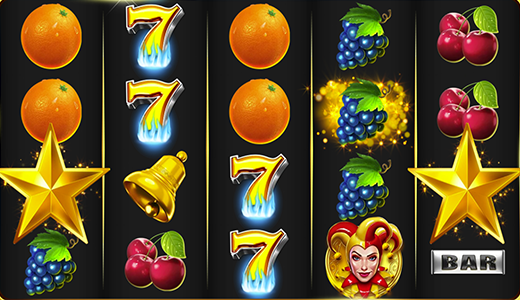