Bonus Hammer: 3 or more Bonus Hammers (Scatter symbol) on reels 1, 3 or 5, regardless of the symbols' positions on the reels, trigger 15 free games with a x2 multiplier and a randomly selected Hammer symbol. The huge Bonus Hammer symbol on reels 2, 3 and 4 has the same effect.

Large symbols: A large symbol that entirely covers reels 2, 3 and 4 can appear at the beginning of a normal spin in the regular game. If the Bonus Hammer appears as a huge symbol you automatically win 15 free games.

Big profits: You will find 12 chests in total in the Golden Chamber. Each has a value of 50 to 500 times your total bet that you can win when you open one. Simply click on one of the chests to open. You win its contents, then the feature comes to an end.

The evil wizard is plotting behind the castle's walls – but you own the ultimate secret weapon, the Golden Hammer! With this weapon and a little luck you will hopefully succeed in entering the Golden Chamber and snatching the treasure. This is the world of Treasure & Glory™, an exciting adventure with great winning chances. Get going and show the wizard who's the hammer-swinging top dog! 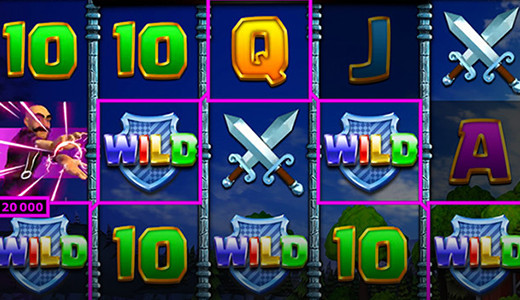