Explore the depths of the sea across five reels and 25 win lines in the adventure slot ALMIGHTY JACKPOTS - Realm of Poseidon™. The mighty Poseidon will keep the waters calm to ensure nothing stands between you and his treasures. Moreover, as the game’s Wild symbol, he grants the biggest winnings of all.

And your chances of winning in this hit slot are boosted even further by a variety of awesome features. For example, there’s the Almighty Jackpots Bonus Game in which five different jackpots with the Hold and Spin feature are simply waiting to be won. And then there’s the Free Games feature in which Poseidon can call the shots. With a little luck and with the help of a giant symbol, you can haul in fantastic winnings!

The aim of your adventure on the high seas in ALMIGHTY JACKPOTS - Realm of Poseidon™ online is to get five matching symbols on the five reels with 25 win lines. The symbols in winning combinations must land on the lines from left to right without being interrupted by any other symbol. During the main game, a symbol will be chosen at random to be the stacked symbol.

To trigger this feature in ALMIGHTY JACKPOTS - Realm of Poseidon™ online, you need six or more Coins to appear anywhere on the reels. During the bonus game the Coin symbols will remain in place. The number of re-spins is determined by the number of Coins that triggered the feature. If not all of the reel positions are occupied by Coins at the end of a re-spin, you’ll receive one, two or three additional re-spins. If all of the positions are filled by Coins after a re-spin, the winnings on the Coins will count double. In addition, you have the chance to win a Grand, Major, Maxi, Minor and Mini jackpot!

Three, four or five Free Game Crowns (Scatter) in this bonus game win you ten Free Games with a randomly chosen giant symbol. The position of the Free Game Crowns on the reels is irrelevant. Poseidon, the Helmet, the golden Vase, the Harp and the Horn of Plenty can all act as the giant symbol, which may land on reels two, three or four.

When the mighty Poseidon draws his trident, you’ll have reason to celebrate, for the sea god in ALMIGHTY JACKPOTS - Realm of Poseidon™ online has an abundance of thrilling winning chances in store for you. Yet he’s not the only attraction in this special slot – there are overflowing jackpots and themed symbols such as the Horn of Plenty and the Harp. And in the Free Games the waves of winnings climb even higher. So, hoist the sails and commence your treasure hunt! 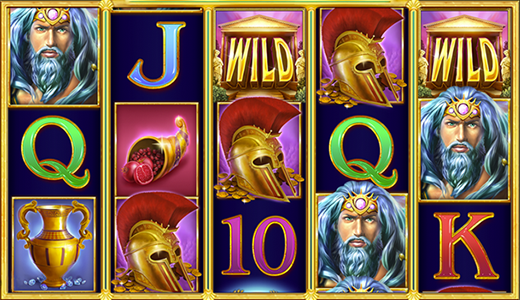