Welcome to ancient Egypt, where the stunning Isis is calling the shots! When this divine beauty rises from her treasure chamber in Ancient Goddess™ online and she is favourably disposed towards you, then wealth and good fortune await you. How you can win her favour? Nothing could be easier: just place countless bets on her and the ancient Egyptian goddess won’t let you down!

This remarkably elegant slot machine is brimming with themed winning symbols such as the Sphinx (highest winnings), the Hound (second highest winnings) and the Falcon (third highest winnings). The profitable symbols in Ancient Goddess™ online are joined by the graceful Isis (Wild) and the Bonus symbol (Scatter) that paves the way to the Free Games.

Below we have gathered the most important facts about Ancient Goddess™ online so that you can get started with gaming right away!

The aim with Ancient Goddess™

Your task with Ancient Goddess™ is to land 3, 4 or 5 matching symbols on one of 20 win lines and 5 reels to access Isis’ treasure chambers. All winning combos start on the first reel to the left and continue along a win line to the last reel on the right. The charming goddess Isis acts as Wild symbol in Ancient Goddess™ and can substitute for all symbols except for the Bonus symbol. The latter pays from left to right as well as from right to left and triggers Free Games.

If you have ventured into this feature, then the riches of the goddess Isis are within arm’s reach. The Bonus game in Ancient Goddess™ online is triggered by 3 or more Bonus symbols in any reel position because they grant you 12 Free Games. The Free Games are played with the stake and win lines of the game in which they were triggered. A different reel strip is used during the feature.

In the Free Games you might pocket more Free Spins with the Bonus symbol or the goddess Isis. 1, 2 or 3 Isis symbols in any reel position earn you 1, 3 or 5 more Free Games. And the enchanting Egyptian has even more in store for you: she upgrades the picture symbols which lasts until the end of the Free Spins.

According to ancient Egyptian mythology the beautiful Isis was rather bus<: she was the goddess of birth, rebirth, magic and the dead. She’s got far less on her plate in our slot: Isis simply puts in an appearance in Ancient Goddess™ online and hands out Free Games or increases your chances of winning when she replaces symbols in winning combos. In other words, she gives you a helping hand in stocking up your player account with Twists. With this honourable task Isis is assisted by symbols like the Scarab, the Crook & Flail or the Sphinx. Fact: if your luck is in, you might raid the treasure chambers of this stunning Egyptian goddess in this fascinating slot! 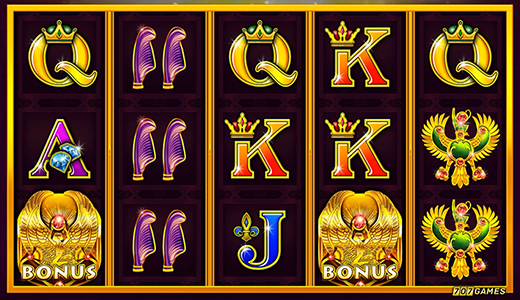