Thor – the son of Odin and bringer of storms – is ready and waiting with his mighty hammer in Asgardʼs Thunder™. When he strikes, you’d better be ready for the winnings that will be heading your way! With a little luck in this mythical slot, you can fill up your account. Simply spin hard and line up lucrative symbols to be a winner! Thor’s hammer, Mjolnir, yields the highest winnings, followed by Thor himself and the Treasure Chest symbol.

The aim of the game Asgardʼs Thunder™ online is to get five matching symbols on the five reels with 20 lines. All win lines run in particular patterns from left to right across the reels. Mjolnir is the game’s Wild symbol, and it can substitute for every other symbol except for the Scatter, Thor’s Fist.

It’s hammer time in the Free Games of this slot! If Thor’s Fist appears three times anywhere on the reels from left to right, it’ll trigger eight Free Games. These free spins are played with the bet and win lines of the game in which they were won. Should Thor strike the reels during the Free Games, every symbol will be transformed into a Mjolnir to significantly increase your chances of winning.

We have polished Thor’s mighty hammer in Asgardʼs Thunder™ online just for you. And with his trusty weapon, the god of thunder will strike the reels so that you can spin free of charge. What’s more, if the Treasure Chest, Drinking Horn or Thor’s Fist also appear alongside Mjolnir, winnings worthy of a god will be yours! 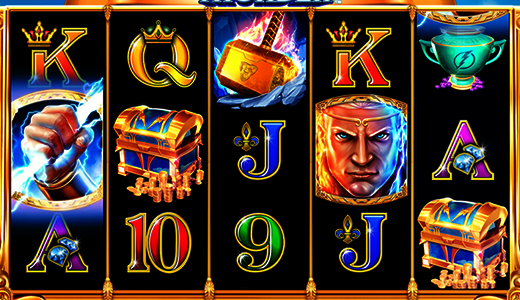