Winnings are a top priority in our slot Book of Ra™ deluxe 10. For this reason we have fitted this superb slot machine with two reel sets: The first set contains five reels with 25 win lines and the second set twelve reels with 75 win lines. There are no limits to the pharaoh’s generosity in this game because Book of Ra™ deluxe 10 online not only offers a huge number of reels and win lines but also Free Games with expanding symbol and stacked Wilds. That way, you might score up to 100 wins in just one game. The Magic Book of Ra is the most valuable symbol followed by the Adventurer and the Pharaoh’s Death Mask.

Aim with Book of Ra™ deluxe 10

Gather five identical winning symbols on one of 25 win lines (first reel set) or 75 win lines (second reel set). On both reel sets the symbols in a winning combo have to start on the first reel to the left and continue to the last reel on the right. Moreover, in the regular game the winning symbols cannot be interrupted by other symbols. The Magic Book of Ra is the Scatter, pays wins in any reel position and triggers Free Games.

If you manage to line up four Wilds vertically on the first reel set in Book of Ra™ deluxe 10, the symbols on the respective reel in the second reel set turn into stacked Wilds.

Background of Book of Ra™ deluxe 10

The Pharaoh has extended his treasure chambers in Book of Ra™ deluxe 10 online to make room for a second reel set. It should therefore be really easy for you to grab the gold of the ancient rulers. Free Games with expanding symbol and stacked Wilds provide even more chances to win. 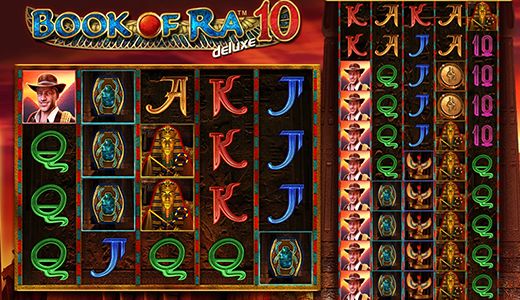