Fancy a trip to ancient Egypt? Then check out Book of Ra Mystic Fortunes online. Get the reels spinning and we’ll whisk you off to the land of pyramids, where you’ll be welcomed by none other than the mighty god Ra. And, with a little luck on your side, he’ll help you navigate the five reels and ten fixed win lines of this slot spectacle to fill your account with winnings. The key to finding fortune is the sun god’s Spell Book, for it can trigger Free Games or even guide you to the jackpot. The Adventurer also plays a crucial role in Book of Ra Mystic Fortunes online, as he delivers the highest winnings. The Mummy and the Statue are the second and third most valuable symbols, respectively. In the ancient Egypt portrayed in Book of Ra Mystic Fortunes, there are not only imposing pyramids, but also special expanding symbols that significantly boost your chances of winning.

The aim of Book of Ra Mystic Fortunes online couldn’t be clearer: Get three, four or five matching symbols side by side on one of the ten win lines, starting on the left. Manage this and winnings will be heading your way. And because Ra’s power is matched only by his wealth, there are other ways to flood your account with prizes. For example, the following symbols need only appear twice on the reels to land you winnings: the Adventurer, the Mummy, the Statue and the Scarab. But it’s Ra’s Spell Book in Book of Ra Mystic Fortunes that you really want to get your hands on, for should this Scatter symbol appear three times, you’ll be set for ten Free Games. During these Free Games, Ra’s Spell Book may open at random at any time to produce a special expanding symbol. Moreover, you can win even more Free Games during these Free Games.

Who wouldn’t want to be as rich as Ra? His Spell Book is the key to unlocking a fortune - not only can it conjure up Free Games, but it can also lead you to one of four overflowing jackpots. Simply get three Spell Book symbols anywhere on the reels, and, with a little luck, the jackpot feature will be triggered. The screen will be filled with twelve golden Coins. Click on them one by one to reveal symbols that belong to one of the following four jackpots: Grand, Major, Minor or Mini. Reveal three matching symbols and you’ll win the corresponding jackpot. The feature will then come to an end.

Sun, sand, pyramids, ancient Egyptian gods, legendary riches – what more could you want? Your share of those riches? Spin the reels of Book of Ra Mystic Fortunes online and you could make that wish come true! Line up as many matching symbols as you can, side by side on the reels, and you will soon feel like a god yourself. The Adventurer and the Spell Book could help you find your fortune. 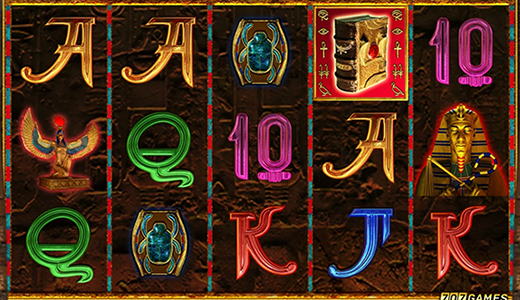