Are you burning for a cult fruit slot? Then look no further than this one!

Burning Wild is a hot and wild slot game with modern features but a retro look. On five reels and five win lines, you can enjoy a fiery slot spectacle that is bound to make you break a sweat while you spin. Why? The juicy fruit symbols not only look good, but in the right combinations, they can be pretty lucrative too. What’s more, the Phoenix Wild can multiply your winning chances.

Want to get stuck in? Then read our game instructions and embark on a gripping slot adventure!

Burning Wild is an online slot machine from Greentube with five reels and five win lines. Your goal is to get three or more matching symbols along one of the win lines running from left to right. Manage this and you’ll be rewarded with Twists. The Cherries and the 7 can even generate winnings in combinations of just two.

The Symbols in Burning Wild online

Burning Wild is a slot that seamlessly combines the tried and tested with the new. That means you can find cult game symbols in a completely new look. The Orange, Plum, Lemon, Cherries, Bell, Melon, Grapes and the 7 can not only combine to form awesome winning combos, but they also look spectacular, fresh and particularly tasty on the reels of this great game.

As the game name suggests, the Wild (the Phoenix) plays a crucial role in this title. It can appear on reels two, three and four, and it is able to substitute for other symbols (except the Scatter). Should the Phoenix form part of a winning combo, it expands to cover the entire reel it landed on.

The Golden Star and the Blue Star are Scatters, with the former able to appear on all reels and the latter only on reels one, three and five. Both of these special symbols can generate winnings no matter where they land on the reels, which adds an extra element of excitement when spinning.

What is Burning Wild?

Burning Wild is a varied fruit slot with five reels and five win lines. The Phoenix Wild can increase your chances of winning, for it can expand to completely cover the reel it lands on. The Blue Star and Golden Star (both Scatters) can also boost the potential for winnings.

Where can I play Burning Wild?

You can, of course, enjoy the timeless fruit slot Burning Wild on GameTwist. The hit gaming website also features many other great slot machine titles that are dedicated to hot and fruity fun. For example, you can check out Sizzling Hot deluxe, Sevens Staxx and Gold Star Fruits.

What's so special about Burning Wild?

Burning Wild unites the characteristics of popular classic fruit slots (cult symbols and easy-to-play setup) with a modern design and high-res graphics. That makes this slot machine perfect for fans of slots from the good old days as well as those who are relatively new to online slot gaming from the comfort of their own home.

Which of the symbols in Burning Wild are particularly valuable?

The Phoenix is the Wild symbol in Burning Wild, and it can appear on reels two, three and four, and expand to cover them with every win. Moreover, it can substitute for other symbols (with the exception of the Scatter). The Blue Star and the Golden Star are the game’s Scatters, which means they can produce winnings for you from any position. 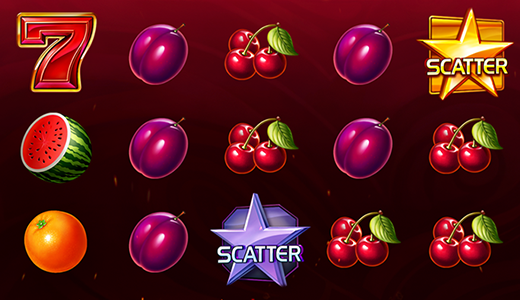