Captain Venture™: Treasures of the Sea

Set sail on a slot adventure on the high seas!

The waters are choppy, the waves are crashing against your ship and your colours are flying in the wind! Join the crew of Captain Venture in his very own slot and search for sunken treasures. In this sequel to the popular classic, a host of exciting features await you on five reels with ten win lines, including the Anchor Drop Re-Spins, a legendary treasure map and the Mystery Multiplier Free Games.

Want to leave your landlubber life behind and set sail with a motley crew? What are you waiting for? Hoist the sails, for the game is about to begin!

Captain Venture – Treasures of the Sea is an online slot game from Greentube with five reels and ten win lines. Get three or more matching symbols along one of the win lines and you’ll be rewarded with shiny Twist treasures. That said, the Captain, the Flag, the Pirate Lady, the Sailor and the 9 symbols need only appear twice on the reels to boost your treasure hunting chances.

The Symbols in Captain Venture – Treasures of the Sea Online

In this slot for seafaring adventurers, your mission is to track down glittering Twist treasures. So, you need to be familiar with the symbols that will lead you to them: in addition to six different gemstones that represent the classic Ace, King, Queen, Jack, 10 and 9 symbols, make sure you recognise the Anchor, the Bottle, the Sailor, the beautiful Pirate Lady, the Flag (Scatter) and, of course, the Captain himself. The Captain is also the game’s Wild symbol, which means he can substitute for other symbols (with the exception of the Scatter, the Anchor in the Anchor Drop Re-Spins and the Treasure Chest in the Treasure Chest Bounty feature) to help you complete winning combos.

Sea Change Feature in Captain Venture – Treasures of the Sea

After any spin of the reels, there’s a chance that the reels will suddenly sink below the water. As soon as they resurface, you’ll see that they will be adorned with different symbols, making lucrative new winning combinations possible that pay out immediately.

What adventure would be complete without the possibility of bagging valuable Free Games? Should you spot the Scatter symbol (Flag) three or more times on the reels at the end of a spin, several Free Games will already be on their way. Precisely how many will be determined before they begin by the Wheel. Moreover, after a Free Game, the Wheel will display the winning multiplier, which can be increased by the Captain symbols.

Further Free Games can be triggered during the Free Games already active.

If you achieve winnings with the required number of Anchor symbols, the reels displaying the Anchors will spin again. Needless to say, this will generate further chances for you to win that should not be underestimated!

Should the treasure map pop up on the screen during a spin, you’ll be treated to an exciting extra feature that can yield even more winnings. The reels will spin and, with a little luck, a Captain symbol will show up to trigger the coveted re-spins. If this happens, the Wheel will determine how many re-spins you will get to enjoy. While the reels spin again, the Captain symbols that had already appeared will roam the reels and highlight the positions they stop on. Once the re-spins are over, the highlighted positions will add to the overall multiplier.

What is Captain Venture – Treasures of the Sea?

Captain Venture – Treasures of the Sea is an action-packed adventure slot across five reels and ten win lines. Iconic symbols and a sea of thrilling features make this pirate game a true slot gem!

Where can I play Captain Venture – Treasures of the Sea?

You can play this fantasy online slot on GameTwist. Jump aboard, set sail and track down the valuable bounty.

And if you love life on the open water, you can also try out Lord of the Ocean, Dolphin’s Pearl deluxe and Tidal Riches!

Which features should I keep an eye out for in Captain Venture – Treasures of the Seas?

On top of the Anchor Drop Re-Spins, this varied slot will keep any budding pirate happy with Mystery Multiplier Free Games, the Sea Change feature and a treasure map that could lead you to even more lucrative re-spins. 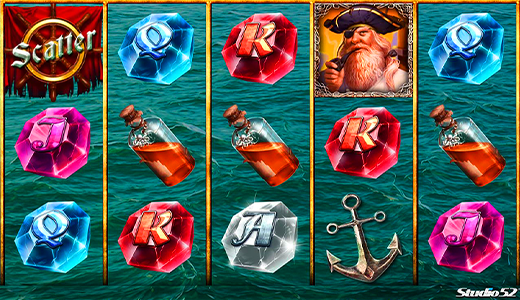