Viva la Mexico! Feel the burn of ten million Scoville and clean up.

If it’s too hot, you’re too weak: Chilli El Toro takes you to the heat of Mexico where you can play with up to 7,200 win ways. There, you can celebrate a fiery fiesta on five reels between Cacti, Roses and black Bulls. Extra spice is added to the gameplay by Wild Chillies, hot multipliers and a Free Games feature that will crank up the heat even further.

Want to take the bull by the horns? Then keep reading and find out all you need to know about this game.

Chilli El Toro is an online slot for everyone who likes life hot. Game developer Redline Gaming really pushed the boat out for this Mexican party: a reel set that forms a peak in the middle, five reels with up to 7,200 win ways, varied symbol sizes and a row of multipliers at the top of the screen. You want even more? A Wild Chilli is on hand to give your winning combinations one final kick, and there are even ten Free Games with an increasing bonus multiplier up for grabs.

Winnings will be yours in this spicy slot as soon as you get three matching symbols to land on adjacent reels from left to right. A valid winning combination must always begin on the first reel on the left.

If you treat yourself to a refreshing drink among the Cacti and Roses in the Mexican heat, while Aces, Kings, Queens, Jacks, the 10 and the 9 dance across the reels, there’s a good chance you’ll be surprised by a snorting Bull. But fear not, for the mighty beast merely kicks up dust and, if you are lucky, lucrative wins for your player account. Chillies are also in the mix in this game, and they’re perfect for adding even more spice to your spinning fun. The fiesta reaches its true climax in the Free Games feature. This is triggered by the Bonus Scatter, which is the only symbol in the game that can generate winnings from any position on the reels.

How the Multiplier Row Works in Chilli El Toro Online

Above the reels is a special row with three positions. The symbols and multipliers shown here change from spin to spin. As soon as a symbol matches a winning combination on the regular reels, your winnings will be multiplied by the respective multiplier (up to x25).

How to Get Free Games in Chilli El Toro Online

What is Chilli El Toro?

Chilli El Toro is an extra-hot, Mexico-inspired slot which celebrates a fiery winning fiesta between Cacti, Roses and Bulls. What stands out most about this slot is that the reel set peaks in the middle. It comprises five reels with up to 7,200 win ways, and above them is an additional row of multipliers. A Wild Chilli is included to give your winning combination an extra kick, and there is a Free Games feature too.

Where can I play Chilli El Toro online?

Chilli El Toro, the Mexico-inspired slot with the black Bull and fiery Wild Chillies, can, of course, be celebrated on GameTwist! You love Mexico? Then you’ll find plenty of fun titles on the hit gaming platform. Why not start with the likes of Chili Bomba Bonus Ways, From Dusk Till Dawn and Chili Heat?

What extras are there in Chilli El Toro online?

Chilli El Toro is played on an unusual reel set whose reels form a peak in the middle. Furthermore, the size of the symbols changes from spin to spin, which can result in up to 7,200 win ways being available. Positioned above the regular reel set is a multiplier row, which, with a pinch of luck, can help multiply your winnings. The fiery Chillies (the game’s Wilds) can pep up your winning combinations, while the Bonus symbol can trigger ten Free Games!

Are there Free Games in Chilli El Toro online? 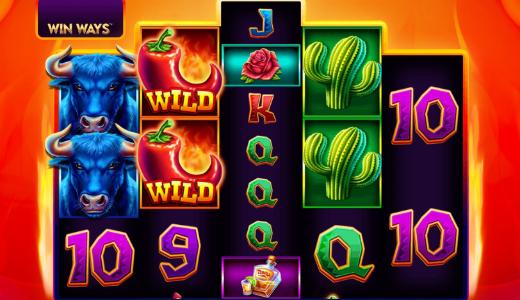