Take aim and clean up: stage another robbery with burglar Bert in this deluxe edition.

In Cops ’n’ Robbers Drop Shot deluxe, you can plan a brand-new heist with the aim of filling up your account. Bert has been busy since his last slot mission, and he now has a new secret weapon to get what he wants: the Drop Shot feature! Not only can it help you target bonus prizes, but it will also drag you into the thick of the action alongside the master thief. Good luck staying one step ahead of the cops!

These slot instructions have been written for everyone who fancies stepping into the shoes of a slot burglar. So keep reading if you want to find out more about Bert’s ingenious plan.

Cops ’n’ Robbers – Drop Shot deluxe is an online slot with a 5x3 format and 25 win lines. Should you manage to get three matching symbols to land on one of the win lines, the winnings will begin to flow. This winning combination must start on the first reel on the left and continue to the right without interruption. Only the Scatter symbols (Bert and Bert’s Golden Statue) are exempt from this rule – they generate winnings from anywhere on the reels.

In Cops ’n’ Robbers Drop Shot deluxe, you are on the run from the Police, Emergency Vehicles and Judges (all natural enemies of thieves like Bert). But, in the right order, they can prove to be very handy. The same goes for the Ace, King, Queen and the Cops ’n’ Robbers logo symbol.

The Bulldog may look rather grumpy, but as the game’s Wild symbol, it performs a loyal service of completing winning combinations. As for Bert and his Golden Statue, they both operate as Scatters, which means they can send loot your way no matter where they stop on the reels. Bert can also trigger the Drop Shot feature, while his golden likeness can land you Free Games.

Hand over the bonus prizes! Bert’s latest invention, the Drop Shot feature, is not to be sniffed at. But you’ll need the man himself to show up and active it first: three Bert symbols in a spin start the red zone, four start the green zone and five the yellow zone.

What happens in the Drop Shot feature?

As soon as the feature is triggered, a shot is fired from the upper edge of the screen. The bonus prize the bullet hits is immediately yours.

Take It or Leave It: Overtime in the Drop Shot Feature

You have a decision to make after each hit. If you opt to “Take It”, you’ll pocket the bonus prize and exit the feature. But if you are not entirely satisfied with the size of your Drop Shot loot, you can choose to “Leave It” and stake the prize. Take this option and some of the prizes will transform into Crosses (X) or Prison Cells before you take another shot. If you hit a Cross, the feature will end. If you hit a Prison Cell, an police line-up will be held.

ID Parade: Will they catch you this time?

Even the craftiest crooks are sometimes put in cuffs. After all, the cops don’t always lose. But you’re not behind bars just yet – maybe you’ll still be released. The line-up will determine your fate:

How to land Free Games in the Drop Shot feature:

Three Golden Bert Statues open the door to the Free Games. In these ten free-of-charge spins, Bert can show up on the reels to place extra Wilds on them.

Cops ’n’ Robbers – Drop Shot deluxe is a thrilling heist slot with a comic design in which you become the accomplice of Bert the burglar. Your goal is to pull of the most lucrative heist possible! The game is played on five reels with three rows and 25 win lines. As soon as the eponymous Drop Shot feature is triggered, the bullets will begin to fly and your chances of winning will increase. Hit the right positions and you’ll land bonus prizes and other extras.

Where can I play Cops ’n’ Robbers Drop Shot deluxe?

Yes! In Cops ’n’ Robbers Drop Shot deluxe, you can trigger ten Free Games if you get three Golden Bert Statues. During these spins on the house, it’s not unlikely that your accomplice Bert will appear on the reels and distribute extra Wilds to increase your chances of landing winnings.

The Drop Shot feature starts as soon as Bert appears on the reel set three times or more in a single spin. A shot is then fired from the upper edge of the screen. The bonus prize you win depends on which position the bullet hits.

Yes. In addition to the Free Games and bonus prizes, there are further extras in the Drop Shot feature. For example, you can stake the winnings you achieve again after a bonus shot. Some of the prizes at the bottom of the screen will be replaced by Crosses (X) or Prison Cells. You can then fire another shot. If you hit a Cross, the feature will come to an end. If you hit a Prison Cell, an police line-up will be held. 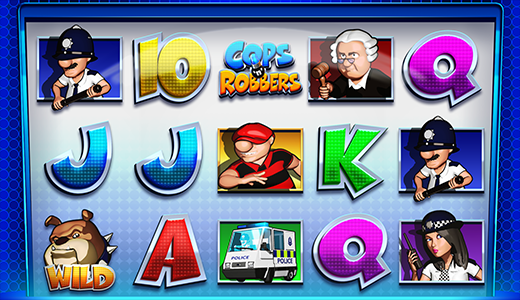