When the Golden Dragon glides across the reels and scatters Wilds in all directions you know that you are playing Dragon Blitz. The thrilling online slot machine with an Asian look captivates with 5 reels, 20 win lines and 2 features. Moreover, this slot boasts Free Games in which you can win more Free Games and symbols that can create very profitable winning combinations.

You want to find out more about this game? Then read the game instructions below, which feature some handy tips.

Dragon Blitz is an online slot from Redline Games. It offers 5 reels and 20 win lines. 3 or more matching symbols must land along a win line running from left to right so that you’ll be on the receiving end of winnings.

The Symbols in Dragon Blitz online

In line with the Asian theme the symbols in Dragon Blitz online have a Chinese appearance. A Knife, a Happy Tree, a Treasure Chest, and a Golden Dragon as well as the classic game symbols 9, 10, Jack, Queen, King and Ace create a Far Eastern vibe and with it a very special gaming ambience.

The Wild acts as special symbol. It can only appear on reels 2, 3 and 4 but packs a punch: It substitutes for all other symbols (except for the Scatter) and can produce particularly lucrative winning combinations. Moreover, it plays an important role in the Wild Dragon Feature.

The Scatter, a Scroll, can score wins in any position. But keep in mind that it only appears on reels 1, 3 and 5. When enough Scroll symbols show up they can trigger the Free Game Feature.

The Wild Dragon Feature in Dragon Blitz is triggered at random and makes it much easier to bag winnings. Because up to 8 Wild symbols are dispersed on the reels during the feature.

This feature can only be activated in a regular round and not during a Free Game.

To launch the Free Game Feature in Dragon Blitz 3 or more Scroll symbols (Scatter) in a regular spin of the reels are needed. You will then receive 10 Free Games.

Should 3 more Scroll symbols land on the reels during a Free Game round you take home 10 extra Free Games and your chances of winning increase even further.

Each Wild symbol appearing in the feature is collected and added to the Scroll horizontally rolled out above the reel window. Once you have gathered enough Wilds all picture symbols visible on the Scroll also turn into Wilds. Each of them bestows 2 extra Free Games on you.

What is Dragon Blitz?

Dragon Blitz is an online slot with an Asian design that is played on 5 reels and 20 win lines. The Free Game Feature and the Wild Dragon Feature bring lots of excitement and boost your chances of winning.

Is there a special feature in Dragon Blitz?

Actually, there are 2 features in Dragon Blitz that set the world on fire: Free Games can be won again and again in the Free Game Feature and up to 8 Wilds are dispersed among the reels during the Wild Dragon Feature.

Which symbols in Dragon Blitz are particularly valuable?

The Wild symbol can substitute for other symbols (with the exception of the Scatter) as well as initiate the Wild Dragon Feature with a little luck. The Scatter (Scroll) is the trigger for the Free Game Feature provided the right amount appears. 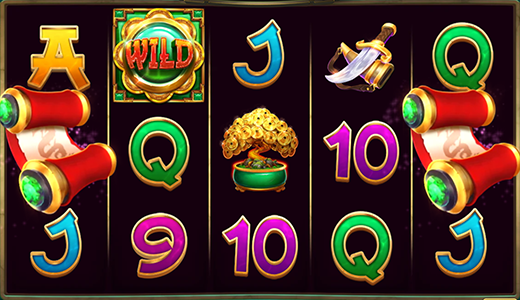