Fan the flames of this slot spectacle with fiery chances of winning!

Dragons are to China what reels are to slots. In the visually stunning online slot Fuzanglong Fire Wilds, the fire-breathing beast rules over the reels. What’s more, as the game’s Wild symbol, it can trigger Free Games! The gripping jackpot feature could also crank up the heat as you spin the reels – a spark of luck is all you need to bank the Grand Jackpot.

Want to find out more about this game? Then read our game instructions below and get spinning!

Fuzanglong Fire Wilds is an online slot machine with five reels and 243 win ways. If you get at least three matching symbols along one of the win lines, side by side and running from left to right, you’ll be on the receiving end of a Twist treasure.

Fuzanglong Fire Wilds features the much-loved classic symbols 10, Jack, Queen, King and Ace. But there’s still plenty of room on the colourful reels for the following themed symbols: the Lotus Flower, Coins, the Amulet, the Treasure Chest and the Lady.

The Dragon is one of two special symbols. It is the Wild, so it can substitute for other symbols (except for the Scatter) and help form lucrative winning combos. Moreover, it can appear in stacks on reels two and four. The second of the special symbols is the Lantern, which is the game’s Scatter. Should it appear enough times on the reels during a regular round, it can trigger the Fuzanglong Jackpot feature.

If you have been secretly hoping that Free Games are up for grabs in Fuzanglong Fire Wilds, we’ve got good news for you. The thrilling slot set in Asia offers you the chance to trigger ten of them in the Free Games feature.

What do you have to do to trigger them? Keep an eye out for the Dragon symbol – should three land in stacks on reel two and/or four, you’ll receive a bonus prize. And with a little luck, this could be the Free Games feature.

What makes these spins even more special is that all winnings achieved during them are doubled.

Moreover, it will generate extra winnings for you: the Mini Jackpot, Minor Jackpot, Major Jackpot or up to 15 times your total stake.

And if fortune favours you by filling up every reel position with Lanterns, you’ll win the Grand Jackpot.

What is Fuzanglong Fire Wilds?

Fuzanglong Fire Wilds is an impressive China-themed slot with five reels and 243 win ways. Lucrative symbols and two fun features serve up not only top-drawer entertainment, but also jaw-dropping chances of winning.

Where can I play Fuzanglong Fire Wilds?

This fiery slot dedicated to China is available on GameTwist. Get the reels spinning and smoking now – hot chances of winning await you! And why not try out our other adventure slots set in the Far East like Rising Tiger – Shēng qǐ de Lǎohǔ, Scat Cat Fortune and Lotus Flower.

Are there also Free Games in Fuzanglong Fire Wilds?

Yes, there are! As soon as three Dragon symbols hit reel two and/or four in stacks, you’ll be granted a bonus prize. One such prize could be the Free Games feature with ten spins on the house. And as if that were not enough, all winnings achieved in these spins will be doubled!

What other feature does Fuzanglong Fire Wilds offer?

Aside from the popular Free Games feature in Fuzanglong Fire Wilds, it’s also possible to activate the Fuzanglong Jackpot feature. This is triggered by at least six Lantern symbols, which will be held in place as you are treated to three bonus spins. Every further Lantern symbol will reset the bonus spin counter to three. With a little luck on your side, this could lead you to pocketing the Grand Jackpot. 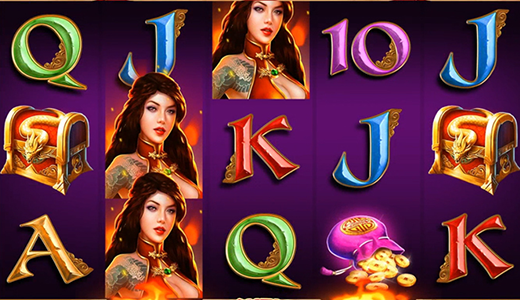