With Goddess Rising the games manufacturer Novoline has once more managed to place a slot in the domain of cult games. With 40 win lines on 5 reels, Free Games, jackpots and a bonus symbol Goddess Rising should make even discerning players with a hankering for the ancient world happy. Join us on this journey to ancient Egypt where the goddess Isis is treating you to precious items from her bulging treasure chambers. This Egyptian beauty simply loves handing out lavish prizes! When she appears on the reels up to 4 jackpots are triggered and you might be showered with winnings. This slot machine sets the bar very high and strikes a chord with contemporary players despite (or maybe because of) its ancient theme. To make sure you won’t miss a thing with Goddess Rising and to get a head-start, we have compiled a couple of pointers for you. Tip #1: keep your eyes peeled for the bonus symbol because it pays out the most, but the Sphinx, Hound and Falcon are also not to be sniffed at.

Your aim with Goddess Rising online is to line up 5 matching symbols along 40 win lines that run from left to right. If a combo of (just) 3 matching symbols lands on a win line that starts on the reel to the very left in Goddess Rising, the doors to Isis’ treasure chamber open up and you bag a prize. As a general rule, winnings are paid from left to right but there is an exception: the Scatter. These symbols pay in both directions.

The goddess Isis is rising in this feature of Goddess Rising, and so do your winning chances. 3 or more bonus symbols in any reel position grant you 12 Free Games. During the Free Spins a different reel section is used. Free Games in Goddess Rising are played with current bets and you can win more Free Spins in the Free Games. And if the mighty goddess Isis puts in an appearance things are about to get crazy: 1, 2 or 3 Isis symbols in any reel position earn you 1, 3 or 5 more Free Games. And that’s not all: in addition, the picture symbols are upgraded (valid for all remaining Free Games in the feature) and you can grab even bigger winnings. As you would expect from a divine lady like Isis, she can substitute for all other symbols (except for the bonus symbol).

One jackpot isn’t bad at all but a masterpiece like Goddess Rising deserves divine chances of winning. For this reason, we have equipped this slot machine with 4 jackpots that can be triggered by the Isis (Wild) symbol. As soon as the feature is under way you can see 12 golden coins on the screen which means you are one step closer to the jackpots. Click on the coins to find out which symbols they conceal. Each coin represents a particular jackpot. If you uncover 3 matching symbols Isis will bestow a Grand, Major, Minor or Mini jackpot on you. The jackpot feature can also be triggered during the Free Games.

The first thing that springs to mind when thinking of ancient Egypt is likely Cleopatra. However, mighty goddesses were ruling the roost back then who could easily compete with the beautiful pharaoh. We are, of course, referring to the ancient Egyptian goddess Isis to whom we have dedicated this superb slot. Goddess Rising online is a divine winning extravaganza of epic proportions. This is made possible by countless winning symbols such as the Sphinx, Falcon and Scarab but also the goddess Isis and the hugely profitable bonus symbol. There are also 4 incredible jackpots that will boost your chances of winning. According to ancient Egyptian mythology Isis held a special position in the community of gods because she was the only one who had magical powers. Isis retains these powers to this day as you might find out while playing Goddess Rising, when the noble beauty raises your player account balance! 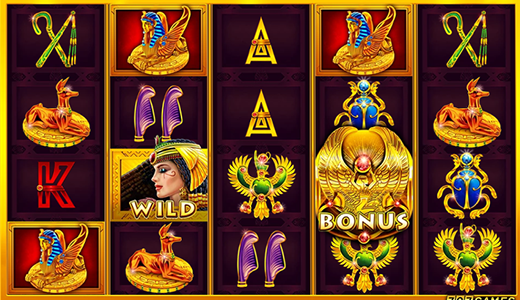