The slot Great American Wilds™ is all about the vast expanse of the American wilderness where Grizzly Bears (second-highest winnings), Eagles (highest winnings) and Bisons (third-highest winnings) are roaming. You can enjoy stunning graphics and thrilling features on five reels with 50 win lines as well as score amazing wins if your luck is in. In addition, five bulging jackpots and the Epic Xtra Stax™ Bonus game are up for grabs.

Your Aim with Great American Wilds™

Your aim in Great American Wilds™ online is to line up five matching symbols along one of 50 win lines. The winning combinations always run from left to right along the win lines and no other symbols must land between them. Winning combinations start from two symbols (Eagle, Grizzly and Bison). The Wild symbol can substitute for all other symbols with the exception of the Scatter (Bonus symbol).

Five or more Bonus symbols in any reel position on reels two, three or four grant you Free Games. The amount of Free Games in Great American Wilds™ online is determined by the number of Bonus symbols. The rules for the Epic Xtra Stax™ feature and the jackpots also apply during Free Games. You can earn more Free Games in current Free Games.

The Epic Xtra Stax™ Bonus game is triggered at random. While this feature is running symbol stacks are added to the reels. The Bonus game may contain any symbol but only one type of symbol appears on each reel.

If the screen is completely filled with the same animal symbol you have landed a jackpot. Five different jackpots can be won (Eagle, Grizzly Bear, Bison, Mustang and Puma jackpot). Which jackpot you take home depends on the animal symbol visible.

The Re-Spin feature is triggered when four Bonus symbols light up on the screen during the basic game. After that the Bonus symbols are frozen and reels two, three and four spin again. The Bonus game keeps going as long as new Bonus symbols appear or until all twelve positions of reels two to four are occupied by Bonus symbols.

The slot Great American Wilds™ offers progressive jackpots, exciting bonus games, precious animal symbols and much more. Fancy another adventure? How about giving the Gamble feature a go where you can double your stakes if luck is by your side! 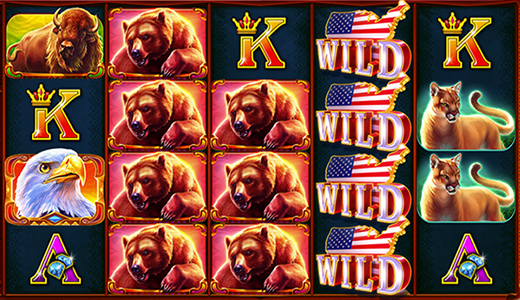