Because of our slot machine Haul of Hades – Super Spinner™ there’s a party going on in the underworld. Hades has spared no expense to have a ball in the realm of the dead with great winning symbols, huge stacked symbols and a Super Spinner Bonus game. Even respectable gods like Zeus, Aphrodite and Athena climb down from Mount Olympus to raise a glass with the boss of the underworld. Hand over your small change to the ferryman and let him carry you across the river Styx to party hard on 5x3 reels. Hades is the ruler of the dead and therefore pays the highest winnings, followed closely by the father of the gods, Zeus, and Athena.

The aim with Haul of Hades – Super Spinner™

Your mission in the dark world of Haul of Hades - Super Spinner™ online? Line up 5 matching symbols side by side on 10 win lines. Winning combos start on the first reel to the left and run without interruption along a win line to the right. Only the highest win is paid per win line.

Hades has snatched precious treasures from the souls in the kingdom of the dead which you can grab in the Super Spinner Bonus game of Haul of Hades – Super Spinner™ online. The feature is triggered when you have won more than 4x your total stake. The original 5x3 reel set is now quadrupled and your chances of winning increase significantly. Moreover, a Wild symbol is added to the reels in this Bonus game. If the Wild lands as a stacked symbol on the 3rd reel of a reel set it is transferred to each 3rd reel of the 4 sets.

Go down to the underworld and spin the reels with Hades in Haul of Hades – Super Spinner™ online. This version of the popular slot Haul of Hades™ has everything that quickens the pulse of a true slot enthusiast: Huge stacked symbols might earn grand winnings and during the Super Spinner Bonus game 20 reels in total are spinning. And Hades is not the only god that can achieve you winnings: Zeus, Athena or Aphrodite also fetch Twists galore! 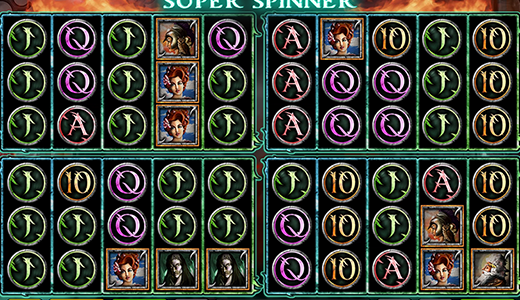