Can you hear the pounding of hooves? Can you feel the ground trembling? Great! When the wild animals of Highroller African Stampede™ charge across the reels, winnings for you won’t be far behind. In this visually stunning slot with five reels and 50 win lines, you must keep your eyes peeled for Elephants (highest winnings), Rhinos (second-highest winnings) and Buffalo (third-highest winnings). And there are plenty of other valuable symbols in this game, such as the Lion, which is the Wild symbol. That means it has the power to substitute for every other symbol and, with a little luck, trigger Twist wins for your player account.

As soon as all positions on the five reels in Highroller African Stampede™ online show the same symbol, you’ll clean up big time. The symbols must be identical and run from the first reel on the left across to the right without interruption. The Elephant, the Rhino and the Buffalo pay out in combinations of just two matching symbols. The Lion – which can appear on reels two, three, four and five only – substitutes for all symbols except the Bonus symbol.

If the Sunset symbol (Bonus) appears three times on reels one, two and three, you’ll be treated to twelve Free Games. The Lion is the sticky Wild in this feature – when it lands on the reels, it remains in place while the other reels continue to spin. Moreover, the Elephant symbol appears in stacks in this feature.

Wild animals, Wild symbols and wild chances of winning – the perfect summary of the slot hit Highroller African Stampede™. Of course, this great game has plenty more to offer, such as Free Games with sticky Wilds, stacked symbols, the Gamble feature and the treasures of Africa! 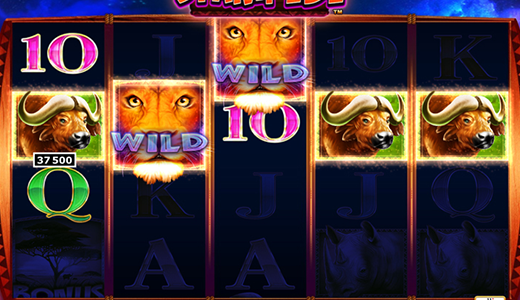