For Native Americans, the buffalo was a symbol of excess, making it the perfect choice for this thrilling slot machine. That’s because in Highroller Buffalo Magic™ online, the buffalo has magical powers. Across five reels with ten win lines, you’ll find lucrative bonus games with expanding Wilds, and themed symbols like the Native American (highest winnings), the Leather Satchel (second-highest winnings) and the Drum. Immerse yourself in the world of America’s indigenous peoples and evoke the magical powers of the buffalo with your stakes!

You’ll be a winner if you get three or more identical symbols from left to right on one of the ten win lines. (The Native American, however, need appear only twice to pay out.) The exception to this rule is the Scatter symbol (Tepee), which pays in every position on the reels. The Buffalo is the Wild symbol in this slot, and it can substitute for every other symbol except for the Tepee.

Three Tepee symbols anywhere on reels one, three and five trigger ten Free Games. If a Buffalo symbol lands on the second or fourth reel and expands to cover every position on the reel during the Free Games, it will remain in place until the Free Games are over. Three further Tepee symbols can trigger another five Free Games; however, this is only possible once.

Should a Buffalo symbol gallop across the second or fourth reel and expand to cover all three positions (not valid for Free Games), all of the winnings achieved at that point will be paid out and the Buffalo symbols will be fixed in place. The remaining reels will then spin again (re-spin). If another Buffalo symbol appears during the re-spin, you’ll be rewarded with an extra re-spin.

America’s indigenous peoples knew that the buffalo was far more than just a gregarious animal. They believed that the buffalo could bestow riches upon those who honoured it. And how do you honour a buffalo? It couldn’t be simpler! Just spin the reels of Highroller Buffalo Magic™. With a little luck on your side, the powers of the buffalo could transform your player account into a meadow of blossoming Twists! 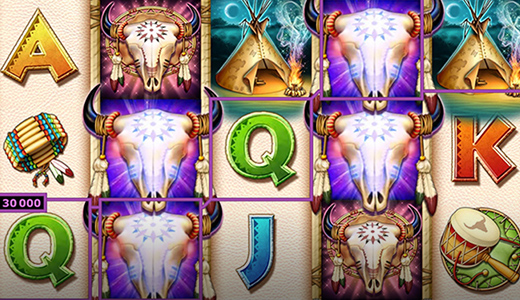