Any good travel guide would recommend immediately seeking shelter if a storm begins to brew in the savannah. But that’s the worst thing you could do in Highroller Savannah Storm Xtra Choice, for the storms in this special slot deliver winnings! While the wild animals run for cover, you can get busy placing your stakes on the five reels of this machine. The Elephant symbol generates the highest winnings, followed by the Rhino and the Lion.

And, as the name of this game suggests, you’ll be called on to make important decisions as you play. Would you like to play with or without predetermined win lines? And do you wish to go all in during the Free Games, or would you rather play safe? Whatever you opt for, we hope you have fun on your winning safari!

The aim of your trip to Africa is to get five matching symbols side by side and from left to right on the reels. You can choose to play with or without win lines. If you opt for win lines, 25 of them will be available. And in games without them, you can make the most of 1,024 ways to win. In these games, the symbols must land on adjacent reels.

The Diamond is the game’s Wild symbol, meaning it can complete winning combinations by substituting for any other symbol except for the Scatter. However, the Diamond may only appear on reels two, three and four. If the Scatter (Tree) lands anywhere on the reels three times or more, you’ll receive winnings.

This feature can only be triggered if you opted to play with five, 15 or 25 fixed win lines. The Free Games can be activated by three or more Scatters in any position on the reels or completely at random after a spin. The Diamond symbol is upgraded with a x2 or x4 multiplier during the free spins of the reels. And should three to five Tree symbols appear again in the Free Games, you’ll be rewarded with further Free Games.

This bonus game is also triggered by three Scatters anywhere on the reels. But it could also simply begin at random after a spin if luck is on your side. Either way, you’ll have to choose 1,024 winning patterns (not fixed win lines) to play this special game. As soon as you have your hands on Free Games, you’ll be called upon to make another decision, for this feature has no fewer than five variants – each more exciting than the last:

This feature can also be retriggered by getting at least three further Scatters on the reels.

You don’t need anything to protect yourself on this special safari. The lions, leopards and other wild animals are not interested in having you for dinner. On the contrary, they are eager to bring you luck and help you fill your pockets with winnings. Highroller Savannah Storm Xtra Choice online is a journey through Africa like no other, because you can influence your chances of winning! 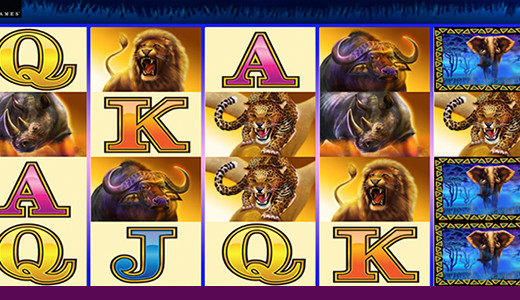