When it comes to three-reel slots, the Super Cherry titles are among the most popular. Why? Because of the thrilling bonus games, juicy fruit symbols and fantastic chances of winning. And if you have a little luck on your side, you’ll be able to make the most of several basic and bonus game variants. There are even three gamble features to round off this super special slot.

Highroller Super Cherry 2000 has three reels with a single win line. The most valuable symbols are the BAR, the Bell and the Cherry.

Your aim in Highroller Super Cherry 2000 online is to get three identical symbols on the win line. Winning combinations always begin on the left and run across the reels to the right. No other symbols may interrupt those of a winning combo. The Star (Scatter) pays anywhere on the reels, while the Cherry symbol need appear only twice to deliver winnings.

If two matching symbols land on the win line (leaving you one short), the Hold feature can be triggered at random to help you out by spinning the reel with the odd symbol again. This could land you a winning combination or even activate the Star feature, which is described below.

The Step feature can also be triggered at random by two like symbols on the win line. The two reels with the matching symbols are held in place as the third reel is nudged one position at a time until a winning combo is formed. There is also a chance of triggering the Star feature in this bonus game.

If a Cherry symbol appears during the Step feature, the Cherry Step feature will begin. This will run until a winning combination comprising Cherry symbols is shown on the screen, and it guarantees winnings 20x the size of your stake.

This grants you two spins with guaranteed winnings. The reels will spin until a winning combination of three symbols is achieved.

This bonus game is just like the one above, but with four winning spins instead of two.

This game begins with all of the reels spinning at once. As soon as they stop, the symbols light up. By hitting the “Start” button, a symbol will be chosen at random and form a winning combo for you.

If luck is on your side in this game and the reels produce a winning combination, you’ll win 10x your stake.

As soon as this bonus game is triggered, you’ll receive seven, ten or 15 Steps. These are like mini Free Games, but instead of spinning, the reels move up or down one position at a time. The Cherry symbols activate a multiplier, and the more symbols you get, the higher it will be. One Cherry symbol gets you a x5 multiplier, two Cherries get you a x10 multiplier, and so on. The feature ends when you achieve a x2,000 multiplier or all of the Steps have been used.

There’s no doubt about it, Highroller Super Cherry 2000 online is an absolute winner of a slot machine. Super Cherry is an excellent game, but the extra features and huge multiplier of this edition take it to another level. Pluck some ‘super cherries’ and you’ll have the chance to load up on Twists like never before! 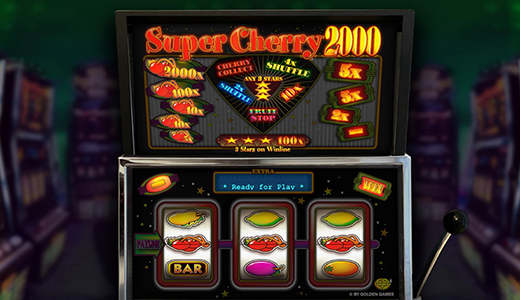