Get involved when the five reels of the royal retro slot Imperial Crown are spinning with pizazz to create the odd lucrative symbol combination. Radiant fruits, sparkling Stars and a bright Bell may appear on five win lines. By the way, the Crown is the most valuable symbol because it acts as Wild and Scatter at the same time. And there are several jackpots waiting to be cracked in the Jackpot Diamonds feature.

Read up on the most important details of the game in the following game instructions.

Imperial Crown is an online slot game with five reels, three rows and five win lines. If you get three or more matching symbols running along a win line from left to right, you’ll be on the receiving end of winnings. The Scatter symbol is exempt from this rule. It can send winnings your way from any position on the reels. The 7 just needs to land twice instead of three times on a wine line to yield winnings.

The Symbols in Imperial Crown

The reels of Imperial Crown are packed with tasty Cherries, Lemons, Oranges, Plums, Grapes and Melons. On top of that, be sure to keep your eyes peeled for the Bell and the 7 as well as the Red and Blue Star. The Stars are Scatter symbols. That means they can generate winnings from any position on the reels.

The Crown after which the slot Imperial Crown is named also acts as Scatter. At the same time it functions as a Wild symbol. However, it can only appear on reels two, three and four where it will expand with a little luck.

The Jackpot Diamonds Feature in Imperial Crown is activated at random and automatically. This is rather handy because all you need to do is to spin the reels and wait to be surprised.

The feature’s centrepiece are the four jackpots. Each jackpot is linked to a gemstone that represents a certain level and the corresponding prize:

FAQs About Imperial Crown Online: What You Need to Know

What is Imperial Crown?

The online slot machine Imperial Crown has five reels and five win lines and is all about succulent fruits and the Crown that might bestow power and success on you. In the Jackpot Diamonds feature you have the chance to bag one of four jackpots and go down in history as the slot monarch.

Where can I play Imperial Crown online?

You can play Imperial Crown on GameTwist – the popular online gaming website. There are many other slots available on the site that feature fruits and are part of the Diamond Mystery series. For example, you can check out 40 Supreme Fruits, 40 Wild Fire 6, Smoking Hot 7’s and 50 Extreme Hot there.

Which symbols in Imperial Crown are particularly promising?

Imperial Crown features three Scatter symbols: the Red Star, the Blue Star and the Crown. The Crown is also the Wild symbol. As a result it can substitute for other symbols (with the exception of the Scatter) and contribute to winning combinations.

Is there a special feature in Imperial Crown?

Yes, the Jackpot Diamonds feature. It is special because it might give you access to the jackpots. To be precise, there are four different jackpots and each is linked to a certain gemstone. Depending on which gemstone you reveal often enough you win the respective jackpot. 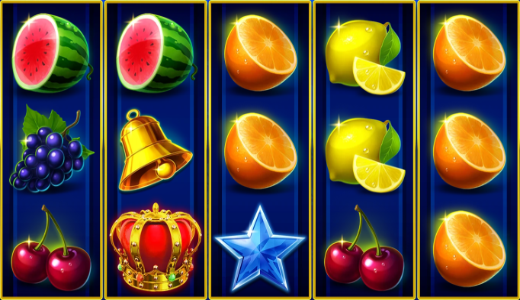