Keep your eyes peeled for the Sheriff’s Star in Lone Star Jackpots™, for if it appears enough times on the reels, it could land you a jackpot! That said, there are plenty of further symbols in this all-pay slot that can help you win big and – with a little luck – even grant you Free Games. The most valuable symbols of all are the Buffalo, the Eagle and the Wolf. Explore the magnificent Wild West on the five reels of this spectacular slot. And with an impressive 243 winning patterns, there’s a good chance you can fill up your player account along the way.

To land Twist winnings in the slot Lone Star Jackpots™ online, you must get five identical winning symbols from left to right on one of the 243 winning patterns. The Cactus is the Wild symbol in this game, meaning it can substitute for all other symbols – except for the Bonus symbol (Gold Coin) and the Sheriff’s Star – to complete winning combinations. The Cactus appears in stacks on the second and fourth reels.

If you manage to get three Bonus symbols (Gold Coins) on reels one, three or five, you win ten Free Games. All winnings in the Free Games are doubled with the exception of those achieved with the Bonus Wheel of Fortune. What’s more, you can win further free spins of the reels if three Gold Coins appear again.

Stacked Wilds with the Bonus Wheel of Fortune

Should you spot three stacked Cactus symbols (Wilds) on reels two or four of Lone Star Jackpots™ online, you’ll get one spin of the Bonus Wheel of Fortune. Land Wild stacks on the second AND fourth reels and you’ll be rewarded with two spins. The Bonus Wheel of Fortune is packed with fantastic winnings, including a 10x multiplier, a jackpot and ten Free Games.

A trip to the American wilderness of Lone Star Jackpots™ online couldn’t be more exciting, because this slot has glorious winning symbols and no fewer than three thrilling features! 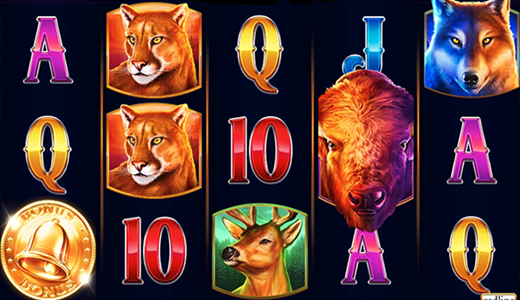