There is no shortage of myths about the legendary Medusa. But the chances of winning in our slot machine Myth of Medusa™ Gold couldn’t be more real! Medusa herself yields the biggest winnings on the five reels and 25 win lines of this slot, followed by Perseus and the majestic Pegasus symbol. Myth of Medusa™ Gold online also features Free Games, Sticky Wilds, the Mirror Bonus and an awesome jackpot!

The aim of the game Myth of Medusa™ Gold online is to get a minimum of three identical symbols side by side and without interruption on the 25 win lines.

Two Scatter symbols in any reel position trigger seven Free Games in Myth of Medusa™ Gold online. At the beginning of the feature, both of the Scatter symbols transform into Sticky Wilds (red Medusas), which can substitute for every other symbol except for the Mirror. These Sticky Wilds remain on the reels until the feature is over. During the feature, further red Medusa symbols may pop up on reels one and five, triggering a Free Game each. Moreover, a Bonus symbol (the Mirror) can appear on reel three during the Free Games. If the expanding Mirror symbol shows up on the reels, one of the winning symbols will be chosen at random to replace all of the symbols on reels two, three and four.

Medusa has hidden valuable treasures in her temple, including a jackpot that equates to 100 times your total bet. To win this jackpot, you must land six Jackpot Overlays on reels two and four. Jackpot Overlays remain on the reels until the end of the feature or until the jackpot has been won. Several different jackpots are up for grabs in Myth of Medusa™ Gold. Once you have won one, all of the Jackpot Overlays will be removed from the reels, giving you the chance to collect them once more.

In our slot machine Myth of Medusa™ Gold, there’s no danger of you being turned into stone by looking Medusa straight in the eyes. In fact, given the winning options served up by this thrilling title, the lady with snakes for hair could breathe new life into your gaming account. Are you brave enough to go face to face with Medusa? 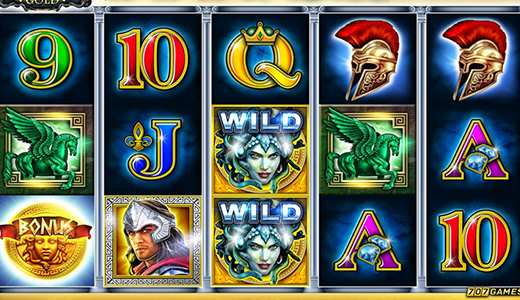