Sensational treasures are waiting to be discovered by you in Phoenix Fortune™ online. This game merges traditional slot gameplay with a colourful user interface and is played in all-pay mode without win lines. In this slot with Far Eastern influences you should pay close attention to the red Phoenix Medal because if it lands on the 3rd of 5 reels it stacks up coins above the reels. With the right spin you can make the coins rain down and trigger the jackpot game. The most profitable symbol in Phoenix Fortune™ is the Lion, while the Frog and the Fish symbol score the second- and third-highest winnings.

Your goal: line up 3 to 5 matching symbols side by side from left to right on the reels. Symbol combos can be created independent of reel positions because this slot features no win lines. However, the winning combinations have to start on the first reel to the left.

3, 4 or 5 Gong symbols appearing on the reels from left to right trigger 10 Free Games in Phoenix Fortune™ online. During Free Games Ace, King, Queen, Jack, 10 and 9 symbols will be removed from the reels which increases your chances for bigger wins. You can win further Free Games in the Free Games.

2 Wild symbols can activate the jackpot feature: the red and the blue Phoenix Medal. The blue Phoenix Medal only appears on the second and fourth reel, while the red Phoenix Medal only lands on the third reel. Once the jackpot feature is underway 12 Medallions appear on the screen which you can uncover by clicking on them. If you discover 3 identical Phoenix Medals you receive the relevant jackpot and return to the regular game. You can win a Grand, Major, Minor or Mini jackpot. The Grand and the Major jackpot are both progressive and increase during the game. Both Wild symbols can substitute for other symbols.

Travel to Asia and return with a bulging player account if your luck is in. That shouldn’t be too difficult because thanks to the all-pay mode winnings can be yielded independent of reel positions. What’s more, 4 jackpots are waiting to be cracked by you! 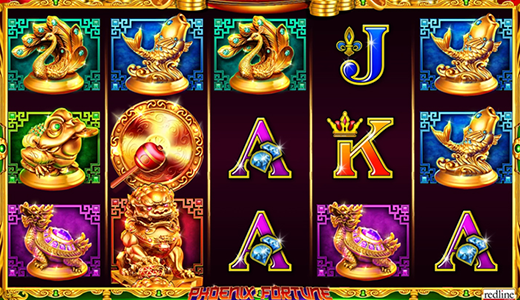