As proud as a peacock: this all-pay slot with the chance to bag a jackpot will make you look your best!

If a peacock wants to show off it spreads its tail feathers. If you want to show off you bag the jackpots in Power Prizes – Noble Peacock. This Asia-themed slot ensures golden hits with its five reels and 243 ways to win. What’s more, possible Free Games, exciting features and five differently sized jackpots enable you to clean up with full force. Not enough? Then go all out in the Gamble game and double your round win with a fifty-fifty chance – if your luck is in you might succeed several times on the trot!

Ready for a great performance? You can find out here how to shine like a Peacock in this game.

Power Prizes - Noble Peacock is an online slot with all-pay function. That means: There are no win lines but you clean up as soon as matching symbols land on adjacent reels. It is crucial that your winning combination starts on the first reel on the left and runs along the win line to the right without being interrupted. You win with three or more identical (regular) symbols in the right sequence. The Lotus Flower, the Red Envelope, the Peacock Feather Wild and the Coin are symbols with special functions that are not or only partially subject to the abovementioned win rules.

Power Prizes – Noble Peacock is an Asia-themed slot. What cannot be missing? Plenty of Asian lucky animals, gold and a little kitsch! Besides diamond-studded standard symbols such as the Ace, the King, the Queen, the Jack and the Ten, a Koi, a Ladybird, a Frog and a Turtle in front of a Zen Fountain are making an appearance. The Lotus Flower smells of Free Games, the Peacock Feather acts as Wild and improves your winning combinations when landing on the second and fourth reel and the Peacock is posing on the screen with the highest win value.

Moreover, there are two symbols that might trigger a special feature:

Oh, and by the way, all symbols with a low win value (Ace, King, Queen, Jack and Ten) are deactivated during the Free Game which means: Your Free Games in Power Prizes – Noble Peacock come with increased chances to win!

Six golden Coins trigger the Power Prizes feature in Power Prizes – Noble Peacock. Initially, all Coins that have activated the feature are held. Then you receive a certain number of re-spins for all remaining positions depending on the number of triggering Coin symbols. Your aim in the re-spins is to collect as many Coins as possible. As soon as the re-spins have been used up you have the chance to earn one to three more spins – this Bonus can only be activated once during the feature.

Should at least one Coin show the name of a jackpot you also clean up the corresponding jackpot. If you manage to cover the entire screen with Coins your win is doubled.

The feature ends when no more re-spins are available or all positions display a Coin.

What is Power Prizes - Noble Peacock?

Power Prizes – Noble Peacock is an Asia-themed online slot with five reels, 243 ways to win and lucrative special features. Amongst other things you can bag five differently sized jackpots and up to 24 Free Games in this slot machine. Apart from this the game is also really pleasing to the eye: Get ready for a Zen Fountain, reels brimming with golden lucky animals, a magnificent Peacock with an extremely high win value and beautiful Peacock Feathers that can improve your winning combinations as Wilds.

Where can I play Power Prizes - Noble Peacock?

All you need to travel to the realm of the proud Peacock in Power Prizes – Noble Peacock is to click a button on GameTwist. Besides many other slots in the Power Prizes series the popular online games site features a huge range of entertaining and popular slot machines – all in the original casino version. You can’t get enough of Asia-themed slots? Then we have a few more recommendations for you: Why not check out Dragon Blitz, Fangbaozhu and Fuzanglong Fire Wilds?

Is there a special feature in Power Prizes – Noble Peacock?

Actually there are three! In the Power Prizes feature you can crack one of five jackpots or double your wins if your luck is in. The Red Envelope feature places a random number of Coins on the screen which increases your chances for the Power Prizes feature to be triggered. Moreover, you can win up to 24 Free Games provided three to five Lotus Flowers land in a spin. 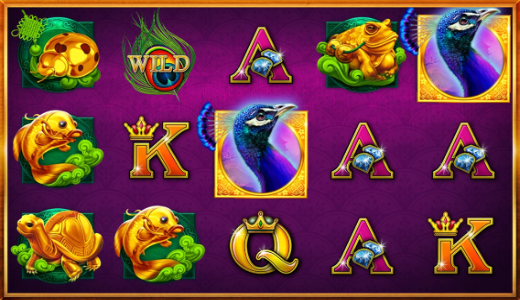