Spread your wings and take off to explore the slot skies!

... just like the Crane in Power Prizes – Royal Crane. In China this bird symbolises good fortune and success – like in our slot machine, because it has by far the highest win value. The Lotus Flowers and the Coins are precious as well. Both can trigger a very special feature so keep your eyes peeled for them, which will be easy from a bird’s eye view!

You want to give your chances wings? Then check out this overview of the game, which covers everything you need to know about this enchanting slot.

Power Prizes – Royal Crane is an online slot with five reels and 243 ways to win. Three or more matching symbols get you winnings, provided the symbols line up in the right way: The winning combination has to start on the first reel to the left and cannot be interrupted by other symbols. The Crane, the Turtle and the Frog are exempt from this rule because they only need to appear twice to score winnings.

As is right and proper for an China-themed slot the reel design as well as the symbols radiate Asian vibes. Just take a look at these symbols – there is a Ladybird, a Koi, a Fish, a Frog and a Crane.

The classic game symbols 10, Jack, Queen, King and Ace are also available and they have a distinct Asian appearance.

Free Games are what you’re looking for in a slot? Then you’re in luck because Power Prizes – Royal Crane comprises a Free Game Feature that can bestow up to 24 Free Games on you. All you need is three or more Lotus Flowers and the feature powers up. They need to land simultaneously on the reels during a regular round.

Apropos, the interesting thing about the Free Game feature is that the classic symbols (10, Jack, Queen, King, Ace) disappear. They make way for different and more valuable symbols.

You need six or more Coins to launch the Power Prizes Feature in Power Prizes – Royal Crane. They start the feature and grant you re-spins, the amount of which depends on the number of Coins that initiated the feature.

All Coins are held in their positions and the re-spins commence. Every further Coin that appears will also be frozen. If you have used up the re-spins you receive between one and three additional Free Games on top. That way you might be able to cover the entire reel field with Coins in the shortest possible time. If you manage to achieve this your wins are doubled.

Moreover, a Coin with the inscription jackpot could emerge. You then win this jackpot automatically and can look forward to a tidy sum of Twists.

Should a Red Envelope appear on the third reel in Power Prizes – Royal Crane, then the Red Envelope feature begins. Between one and four Coins are sprinkled on the reels. They replace the symbols that were initially located in these positions. The Red Envelope itself also turns into a Coin.

What is Power Prizes – Royal Crane?

Power Prizes – Royal Crane is an online slot machine that takes you on a captivating journey to Asia. Five reels, 243 ways to win and plenty of symbols are the key elements of this slot. The Free Game feature, the Power Prizes feature and the Red Envelope feature promise amazing entertainment and increased chances of winning.

Where can I play Power Prizes – Royal Crane?

The Asian-inspired slot hit Power Prizes – Royal Crane can be found on GameTwist, the popular online gaming site. There are many more games with a Chinese or Japanese flair available on this website. Why not give Dragon Blitz, Fangbaozhu or Fuzanglong Fire Wilds a try?

Is there a special feature in Power Prizes – Royal Crane?

There’s not one, but three! The star attraction in the Free Game feature are Free Games, of course. In the Power Prizes feature you can either crack a jackpot or double your wins. And the Red Envelope feature turns certain symbols into Coins which are essential for triggering the Power Prize feature. 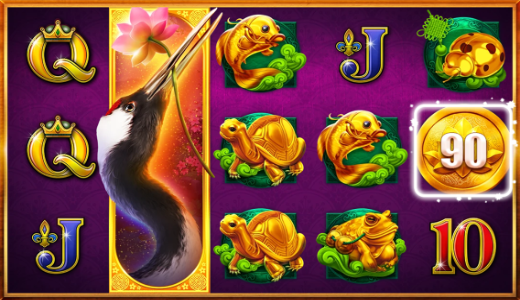