Play Prize of the Nile™ online for free now!

Prize of the Nile™

Sail along the Nile and your breath will be taken away not only by the stunning pyramids, but also the huge treasures waiting for you. In the land of a mesmerising Egyptian ruler, there is no shortage of winnings and bonus games. On the five reels and 30 win lines of Prize of the Nile™, you can make the most of valuable symbols like the treble 7 (highest winnings), the double 7 (second-highest winnings) and the single 7 (third-highest winnings), as well as the double BAR and the enchanting Pharaoh to gold-plate your chances of winning. But the best thing about this exciting expedition are the Pay Day winnings: Six stunning jackpots are just waiting to be claimed!

Aim in Prize of the Nile™

The aim of your treasure hunt is to get five identical symbols on one of the 30 win lines. If these winning combinations begin on the far left and run across the reels to the right without being interrupted by any other symbols, the winnings will flow into your pocket. The Scatter (Golden Pyramid), however, pays in every position. As the game’s Wild symbol, the Pharaoh can substitute for all other symbols except for the Scatter and the Pay Day symbol. And the latter has the power to win you up to six legendary jackpots. Simply get the Pay Day symbol to appear three times or more in any position on the reels to be a winner. The highest prize will be all yours should you get ten such symbols on the screen at once.

Visit the mysterious Pharaoh in Prize of the Nile™ and – with a little luck – you’ll be richly rewarded. If you win the favour of the mighty ruler, perhaps she will show you the way to the Golden Pyramids and lucrative Free Games.

Prize of the Nile™ overview

Prize of the Nile™ features

Prize of the Nile™ gallery 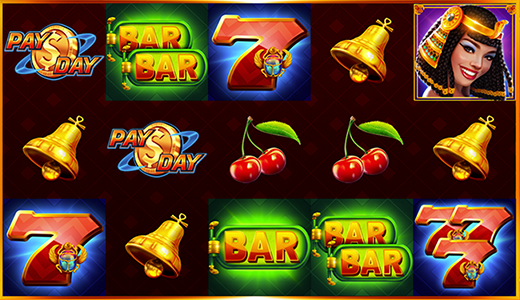