Romeo & Juliet - Sealed with a Kiss™

Who doesn't know them? Romeo and Juliet – the most famous lovers of all time. Shakespeare’s play named after the couple doesn’t have a happy end: But with a little luck, our slot dedicated to the tragic tale and featuring five reels and 30 win lines will put a smile on your face! Romeo & Juliet – Sealed with a Kiss™ is absolutely packed with profitable modifiers and bonus games. To see why you should be excited about spinning the reels of this special slot, look no further than the most valuable symbols – the Love Letter, Romeo and the Dove – that can boost your winnings with impressive multipliers. And with the chances of winning offered in this game, there’s no reason at all to feel sad!

Aim in Romeo & Juliet – Sealed with a Kiss™

To bag Twists in this slot, you must get five matching symbols lined up on the reels from left to right. That said, the Love Letter and Romeo symbols need only appear twice to pay out. Please note that no other symbols may interrupt the symbols of a winning combo.

Romeo can appear at random after a winless spin to nudge the first reel and shift the symbols. This opens up a new winning window. This bonus feature can be re-triggered.

During a spin, the lovesick Romeo can give you a sign, encouraging you to pick one of the reels. As soon as the reels stop spinning, the symbols on the reel you have chosen will be transferred to the remaining reels and, with a bit of luck, land you one or several wins.

Modifier: A Brush with Love

Been left empty-handed after a spin? Don’t worry, for the modifier A Brush with Love can be triggered at random. Romeo will appear and replace the symbols on the reels with new ones that could generate winnings for you.

Modifier: Sealed with a Kiss

What does Romeo love doing more than anything else? Writing love letters, of course. And he makes no exception in Romeo & Juliet – Sealed with a Kiss™ online. While the reels are spinning, Romeo can pull out his quill and write a love letter for his Juliet. Once he has finished, he’ll place the letter at the top of the first reel, where it will transform into a stacked Wild symbol. If you achieve a win in the following spin, the Wild symbol will move along to the second reel. And with every subsequent win, the stacked Wild will move one reel further. The aim is to reach the fifth reel, where Juliet will trigger the Free Game feature.

As already mentioned, this feature is triggered when the stacked Wild covers the fifth reel. Once the feature begins, Juliet will occasionally embrace the Love Letter from her Romeo. When she does, either Wild Hearts or Free Game Hearts will flutter from the reels. The Wild Hearts can move across the reels during a spin and settle in a position that could generate winnings for you. The Free Game Hearts can add further Free Games to the bonus feature. What’s more, Juliet can add a huge Wild Heart (measuring 2x3, 3x3 or 4x4 positions) to the reels.

You don’t have to be well versed in Shakespeare’s famous tragedy to play Romeo & Juliet – Sealed with a Kiss™. All you have to do is place your stakes and get spinning. But unlike for poor Romeo and Juliet, fortune could favour you and shower you with Twists galore! 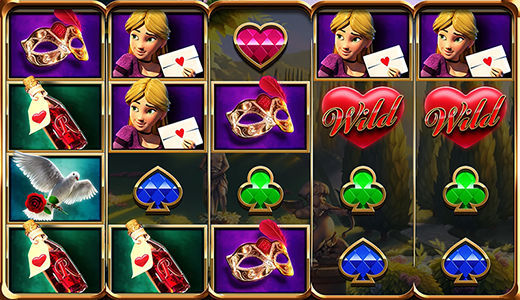