Not suitable for landlubbers – the most ferocious pirate slot ever!

The waves are thundering, the spray is blowing against your ship’s bow and the wind is howling across the deck. This can only mean one thing: you are smack dab in the middle of the thrilling pirate slot Seven Seas Jackpots. You will encounter 5 reels, 20 win lines and plenty of profitable symbols on your voyage across the seven seas. With a little luck you may also bag juicy prey in the exciting Free Game feature and you can set sail for 4 bulging jackpots in the Seven Seas Jackpots Feature!

Fancy trying your luck? Then read our game instructions and embark on your maritime slot adventure!

Seven Seas Jackpots is an online slot game from Redline Games with 5 reels and 20 win lines. Place 3 or more matching symbols along one of the win lines running from left to right and you’ll be rewarded with shiny Twist treasures.

You sail across the world oceans in this adventurous buccaneer slot hunting for precious slot treasures. Naturally, you will come across symbols that are all about a pirate’s life: Besides classic fruit symbols such as Cherry, Lemon, Orange, Plum, Grapes, Watermelon, Bell and Seven the game contains a Treasure Chest, a Golden Coin and a Pirate Lady. The latter acts as Wild and can substitute for other symbols (with the exception of the Scatter), while the Treasure Chest is the Scatter and triggers Free Games if enough of it appear. The Golden Coin is also a Scatter and can activate the Seven Seas Jackpots Feature if your luck is in.

To capture profitable Free Games in Seven Seas Jackpots you just have to keep your eyes peeled for the Treasure Chest symbols. 3 of them landing in a regular round are already enough to start the Free Game Feature with 5 extra spins and a giant symbol.

The giant symbol covers 3 by 3 reel positions, only appears on reels 2, 3 and 4 and can show any motive. No Treasure Chest, Coin or Pirate Lady symbol can land on reel 1 and 5 during Free Games.

Should the giant symbol display a Treasure Chest and appear on the reels, 3 more Free Games are activated.

If 5 Coin symbols put in an appearance during a Free Game round, the Seven Seas Jackpots Feature is triggered.

This additional Bonus game comes with amazing chances of winning. To trigger the feature you simply have to aim for five Coin symbols in a regular spin.

They will grant you 3 re-spins and every Coin symbol that appeared is held in place and resets the re-spin counter to 3. All winnings scored by Coin symbols are paid at the end of the re-spins or if the entire screen is filled with Coin symbols, which also means you have cracked the Grand Jackpot. Alternatively, you have the chance to win the Mini, Minor or Major Jackpot or pocket up to 15 times your total bet from the regular rounds.

What is Seven Seas Jackpots?

Where can I play Seven Seas Jackpots?

This fierce slot extravaganza is available on GameTwist. There you will also find many more action-packed maritime slots. How about giving Captain Venture, Age of Privateers or Pirates a try?

What special features can I expect in Seven Seas Jackpots?

In the popular Free Game Feature you can significantly increase your chances of winning thanks to lucrative Bonus rounds. The breathtaking Seven Seas Jackpots Feature might treat you to the Grand Jackpot if you’re in luck. 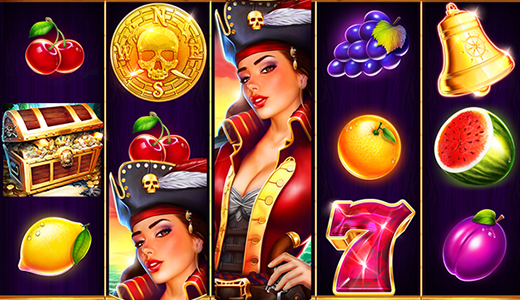