Sherwood Forest was once a lawless place where arrows were fired and swords were swung at the drop of a hat – especially when Robin and his men confronted the rich! Thankfully, those days are long gone, meaning you can now enjoy the adventure slot Sherwood Showdown™ online in peace. What’s more, the weapons have been replaced by winning symbols, modifiers and Free Games! The highest winnings in Sherwood Showdown™ online are achieved with the Golden Arrow (the game’s Wild symbol) and the Sherwood coat of arms, as well as Robin’s companion, Maid Marian (second highest winnings).

Collect three to five matching symbols on the five reels and 20 win lines of this slot for Robin to reward you with Twists. Sherwood Showdown™ online also features no fewer than six special modifiers and two bonus games.

Your spin ended without a win? Fear not, for in Sherwood Showdown™ online there’s a chance that Robin will sound his horn for the reels to rotate again until you land a win.

After an unsuccessful spin in Sherwood Showdown™ online, Foxes may appear on the reels and spin them until a winning combo is formed.

During any spin in Sherwood Showdown™, the Scatter symbol (Strawman with an Arrow) may appear on reels one and three, causing the fifth reel to increase in height to accommodate four or even five symbols. This increases your chances of being awarded a Free Game bonus.

Robin is a master marksman, and he’s more than happy to prove it in Sherwood Showdown™ online. During any spin, the infamous outlaw may fire an arrow at the reels and add multiple symbols of the same type.

The hero of Sherwood Forest may appear during any spin with a compass in his hand. The reels will then move in the direction shown on the compass, revealing new winning combinations as they do. This continues until no further winnings are achieved.

For this modifier, Robin once again needs his trusty bow and arrow in Sherwood Showdown™ online. If he manages to knock a bird’s nest from a tree with a well-placed arrow, birds will lay eggs in it and increase your multiplier up to x20. Golden eggs are worth treble.

If you discover the Scatter symbol in any position on reels one, three and five, you’ll be rewarded with Free Games. The fifth reel will determine the type of Free Game you win. In every Free Game, Coin symbols with various multipliers will be added to the reels. Bronze Spins: x1 Multiplier. Silver Spins: x2 Multiplier. Gold Spins: x3 Multiplier. Platinum Spins: x4 Multiplier. King Spins: x5 Multiplier.

The Hold & Spin Streak Feature in Sherwood Showdown™ online can only be triggered during a Free Game. The trigger is a golden Coin with a x2 Multiplier. Once this appears, all of the Coin symbols will be fixed in place as the reels spin again. The feature continues until no further Coins appear on the reels. Your stake will then be multiplied by all of the Coins shown on the screen.

Sherwood Showdown™ online is jam-packed with action, multipliers and winning symbols that will catapult your chances of winning into the stratosphere. So, what are you waiting for? Grab your bow and arrows, ready your sword and go hunting for Twists with Robin! 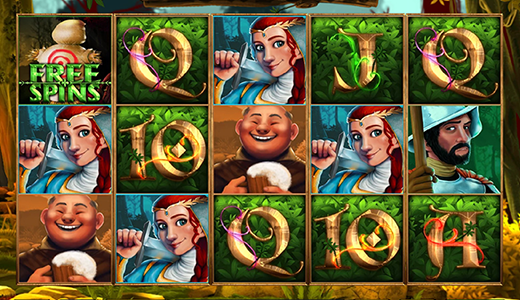