With creepy winning symbols and thrilling bonus games, the all-pay slot spectacle Spooky Spells™ has everything a game needs to conjure up fun and excitement. And with five reels, 243 win ways, a Free Game feature, stacked Wilds with Bonus Wins and a jackpot feature to boot, you’ll be under its spell in no time at all. The Sorceress plays a central role, because she has the power to magic up the highest winnings. And she is joined on the reels by the Broom (second-highest winnings) and the Hourglass (third-highest winnings).

Spooky Spells™ online is an all-pay slot, which means there are no win lines. Three or more matching symbols from left to right and without interruption are the winning formula for Twists in this game. In which positions the symbols land is irrelevant. The Spellbook, however, triggers winnings for you anywhere it appears, for it is the game’s Scatter symbol. The Cauldron is the Wild symbol, meaning it can substitute for any other symbol except for the aforementioned Spellbook and the Bat.

If three Spellbook symbols appear on the first, third and fifth reels, the Free Game counter will race up to ten. During these free spins of the reels, all winnings will be doubled. Moreover, ten further Free Games can be triggered.

Should three Cauldrons stop on the second or fourth reels in a stack, the Bonus Win feature will begin. For three Cauldron symbols, you’ll get the chance to pick one Bonus Win; for six Cauldrons, you can take two Bonus Wins. Up for grabs are a x10 multiplier, a jackpot and ten Free Games.

Six or more Bat symbols on the reels trigger the Spooky Spells Jackpot feature. The Bat symbols that trigger the feature remain in place while the other positions spin again three times. Every time a further Bat flaps onto the screen, you’ll win another three spins. The winnings will be paid out as soon as you have used all of your bonus spins or the screen is full of Bat symbols, which will land you the Grand Jackpot. But even if you don’t hit the biggest prize, the Bat symbols can still help you bag the Major, Minor or Mini jackpot or a x15 multiplier.

Get ready for winnings that will send a shiver down your spine in Spooky Spells™! This slot will take you on a thrilling journey across reels featuring Bats, Skulls and a Sorceress who, with a little luck, will reel off one magic spell after the next to conjure up countless Twists for your player account. 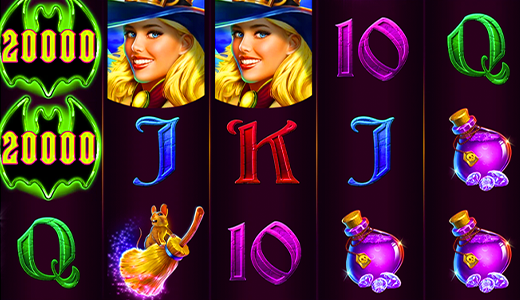