This Rolls Royce of slot machines is among the most popular titles to feature three reels. That’s because the three Super Cherry reels with a single win line deliver simplicity, fun, excitement and awesome chances to win. So, pick a Super Cherry or two and you’ll soon have more than enough Twists to feed your account with!

Although this game doesn’t feature the flashy design of other slot titles, there’s no chance of you getting bored, for Super Cherry 1000 online is packed with profitable bonus games, like the Step and Star features. The BAR symbol is responsible for delivering the biggest winnings, followed by the Bell and the Cherry.

Your aim in Super Cherry 1000 is to get three identical symbols on three reels with a win line. However, the Cherry symbol needs to appear only once for you to land winnings. All line winnings pay from left to right; the winning symbols may not be interrupted by other symbols.

You get two re-spins with guaranteed winnings. The reels spin twice to land you a random winning combination comprising three symbols on the win line.

All three reels spin again before quickly being stopped. The nine symbols visible on the screen will then flash at random. When you click the “Start” button, a symbol will remain illuminated, and the reels will transform it into a winning symbol.

If you manage to land a winning combo in this bonus game, your stake will be multiplied by ten.

If you manage to activate the Cherry Collect feature with a spin of the reels, simply click on “Start” to begin the bonus game. The number of Steps you receive will be chosen at random, with 7, 10 and 15 flashing up on the screen, one after the next, until you stop them. Steps are Free Games, but they don’t involve spinning the reels like in other slots; instead, the three reels rotate by a single position per Step, either upwards or downwards.

Your objective is to get Cherries on the win line shown. Once you get your first Cherry in place, you’ll win the x5 multiplier. Get a second Cherry into position and you’ll win the x10 multiplier, and so on. The Cherry Collect feature comes to an end as soon as you have won the x1,000 multiplier or you have used up your Steps. The Steps you have remaining will be counted down on the screen.

Super Cherry 1000 online is all about sweet fruits – above all the Cherry – and numerous bonus games. As soon as you get the tasty fruit lined up on the reels, your pockets will be filled with delicious Twists. And your chances of winning will be boosted by a host of bonus features, multipliers and the gamble game! 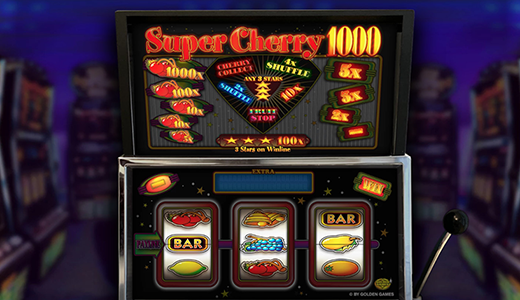