Heads up, pearl divers – this deep-sea slot has some particularly beautiful specimens to offer!

The Pearls in this ocean slot are not just pretty – they also have very special abilities. As Scatters they can score winnings in any position, and in the spectacular Lock-and-Spin feature they represent jackpots you can crack. You can expect substantial winning chances in Thunder Cash Dolphin’s Pearl on five reels with ten lines and numerous symbols with an oceanic design.

If that got you curious and you want to find out more about this exciting slot machine, then simply read the following game instructions.

You win in Thunder Cash Dolphin’s Pearl if you land three or more matching symbols along a win line in a spin. Exempt from this are the 9, the Ray and the Lobster; they achieve wins when they land twice on a win line. A valid winning combination starts on the first reel to the left and has to run to the right without being interrupted. Every hit is displayed automatically.

Deep down in the ocean colourful creatures are romping about that can do much more than just swim and look nice. They are the game symbols in Thunder Cash Dolphin’s Pearl that can help you to achieve fabulous winnings. Classic game symbols such as the 9, the 10, the Jack, the Queen, the King and the Ace are joined by a Fish, a Fish Swarm, a Seahorse, a Ray, a Lobster and the eponymous Dolphin. The latter also acts as a Wild symbol. This means it can substitute for other symbols (except for the Scatter) and complete winning combinations. If this is the case it doubles all wins that come about.

The Pearl is also a very special symbol. As a Scatter it can participate in a win even when it doesn’t land on a win line. If the right amount of Pearls appears after a spin they trigger the Lock-and-Spin feature in which they are also very important. More on that later.

Pearls beautify every necklace and they can also be very important game symbols. In Thunder Cash Dolphin’s Pearl for example, they can trigger the legendary Lock-and-Spin feature. How? Very simple: After a regular spin at least six of them have to appear on the reels simultaneously. Then three Free Games start during which the Pearl symbols are held in their positions. Each further Pearl landing during the Free Games is also frozen and resets the number of Free Games to three. Some Pearls might have a label that represents one of four jackpots. Should the same label appear three times you win the respective jackpot and plenty of Twists.

What is Thunder Cash Dolphin’s Pearl?

Thunder Cash Dolphin’s Pearl is an online slot with five reels, 10 lines and many oceanic game symbols. Regardless of whether it’s Fish, Seahorse or Ray – they can all help you to reel in winning treasures. The Lock-and-Spin feature gives you the chance to bag one of four jackpots.

Where can I play Thunder Cash Dolphin’s Pearl?

You can dive for pearls on GameTwist – the cool online gaming website. Besides Thunder Cash Dolphin’s Pearl you will find many slots here that have long since achieved cult status. For example, why not try spinning the reels of Book of Ra deluxe, Lucky Lady’s Charm deluxe or Lord of the Ocean?

What features are there in Thunder Cash Dolphin’s Pearl?

In Thunder Cash Dolphin’s Pearl you can improve your gaming kitty with the Lock-and-Spin feature. It starts with three Free Games during which all Pearl symbols landing on the reels are held. If your luck is in you will get enough Pearl symbols to pocket one of four jackpots. 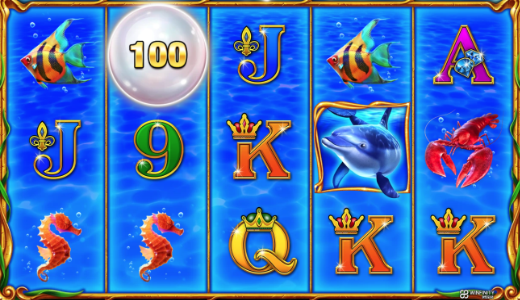