When the rolling of thunder approaches and the reels begin to tremble, you know that it’s time for Thunder Cash - Fruity Fruity. With a little luck, you’ll be able to form profitable symbol combinations along the 50 win lines and pluck a generous portion of Twists from the heavens. What’s more, this slot boasts two features that deliver particularly special spinning action and even the chance to hit a jackpot.

Do you want to find out more about this slot game? Then read our game instructions, which include some very handy tips.

Thunder Cash - Fruity Fruity is an online slot game with five reels and 50 win lines. At least three matching symbols that run along a win line from left to right are required for you to land winnings. This string of identical winning symbols must not be interrupted by any other symbols.

The Wild and 7 symbols are exceptions, for they only need to appear twice for you to form a winning combination.

A retro slot like this wouldn’t be truly genuine without the right symbols. For this reason, you’ll see the following spinning around the reels in Thunder Cash - Fruity Fruity: Lemons, Oranges, Cherries, Plums, Grapes, Melons, Bells and 7s.

The Wild symbol can substitute for other symbols (except for the Scatter, Bonus Symbol and Coins) to complete winning combinations. However, it can only appear on reels two, three and four.

The Scatter, an overflowing Money Bag, not only has the highest symbol value, but it can also generate winnings irrespective of where it lands.

The Star is the game’s Bonus Symbol, which means it can trigger the Pick and Win feature if it appears three or more times on reels one, three and five during a single spin.

And at least six Coins trigger the Coin Respin feature, during which you could bag one of four different jackpots if luck is on your side.

The Pick and Win Feature

You need three or more Bonus Symbols in Thunder Cash - Fruity Fruity to trigger the Pick and Win feature. These symbols must land simultaneously on reels one, three and five in a regular spin. You can then click on one of the Bonus Symbols to reveal an awesome win, which could be 25x, 50x or 75x your total stake.

You have the chance to pocket a jackpot in the exciting Coin Respin feature. Should six or more Coins stop on the reels in a normal spin, they will be held in place as the feature begins. You’ll be granted three re-spins in which you can collect even more Coins. Each additional Coin that appears will reset the re-spin counter to three and will also be held in its position.

Coins with the label “Grand” can show up on reels one, three and five. If three such symbols are visible on the reels at the end of the feature, the Grand Jackpot will be yours. If one or two “Grand” Coins are in sight, you’ll receive either 50 or 100 times your total stake as the feature comes to an end.

When your re-spins are used up or all of the positions on the reels are occupied by Coins, the feature ends and any winnings achieved during it are doubled (except for the Major and Grand jackpots) and paid out.

What is Thunder Cash - Fruity Fruity?

Thunder Cash - Fruity Fruity is a varied online slot game that combines elements from popular retro titles with new features. So, ready yourself for classic slot symbols, modern design and, with a pinch of luck, lucrative winning combinations.

Where can I play Thunder Cash - Fruity Fruity?

Thunder Cash - Fruity Fruity is, of course, available for you to play on the hugely popular online gaming website GameTwist. And that’s where you can find a wide variety of further slots with fruity themes that you absolutely must check out. For example, Feelin‘ Fruity 10™ and Fruit King!™ Cash Respin are well worth a look.

Are there special features in Thunder Cash - Fruity Fruity?

Yes. There’s the Pick and Win feature, in which you can land a Mystery Bonus, and the Coin Respin feature, which is triggered by six or more Coins that are held in place. You’ll get three re-spins to enjoy, giving you the chance to collect even more Coins and, with a little luck, the Grand Jackpot.

Which symbols in Thunder Cash - Fruity Fruity are particularly valuable?

The Money Bag (Scatter) in Thunder Cash - Fruity Fruity enables you to win regardless of its position on the reels; the Bonus Symbol can activate the Pick and Win feature if enough appear; and the Coin can trigger the Coin Respin feature. The Wild symbol also plays an important role, for it can substitute for other symbols and complete winning combinations. 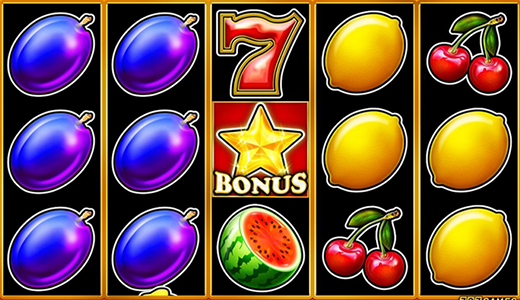