With Top oʼ the Money 20 pay lines on 5 reels await you. In this slot you meet the leprechaun, the Irish goblin, who hands you a pot of gold at the end of the rainbow. The Top oʼ the Money symbol carrys the highest winnings.

Your aim in Top oʼ the Money is to line up 5 identical winning symbols on one of the win lines running from left to right across the reel set.

The cloverleaf acts as a Wild symbol: It can substitute for all symbols and therefore increase your chances of winning significantly.

In the slot Top oʼ the Moneyreels are not spinning but symbols fall on them from above. If this creates a right symbol combo the symbols dissolve after the winnings have been paid out and make room for new symbols. The Freefall Bonus ends only when no more winning combos appear.

The Colossal-Reel-Bonus can be triggered prior to every spin. Instead of five single reels one large reel is displayed that is spun several times by the goblin. The reel shows a multiplier every time; when the feature ends the multipliers are added up and your win is paid out. Eventually, you return to the regular game.

If you land a win following a spin an arrow above the reel set lights up. If you then land at least 4 right symbol combos in a row with the Freefall Bonus (this means you need at least 5 wins consecutively) free games are triggered. How many rounds you can play depends on the number of free games that you have won in the regular game (5, 7 or 10). During free games there are 5 more Wild symbols - in other words your winning chances are even higher! Free games are played with the same stake as in the regular game and can be triggered again in the free spins.

Have you ever asked yourself where a rainbow starts and ends and whether there is a chance to get to these magical places? Top oʼ the Money offers you this chance now: In this slot the shy but very friendly leprechaun, the goblin from Irish mythology, awaits you at the end of the rainbow with a pot of Twists! 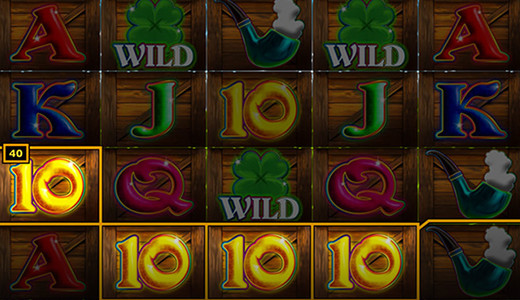