Fancy a double helping of your favourite classic symbols? Our online casino has just the game for you. Get the reels, packed with Watermelons, Oranges, Pears and Red 7s, spinning in the 2-for-1 slot sensation Twin Spinner! There’s no shortage of symbols you know and love in this game. Plus, they are joined on the reels by the Golden Star and the Crown to increase your chances of winning. The game is played with two sets of reels that function completely independently. The Golden Star is the most valuable symbol in the game (it pays the biggest winnings), followed by the Red 7 and the Watermelon.

To ensure you hit the ground running with Twin Spinner online, we’ve got a few tips for you. But before we get started, make sure you always keep an eye out for the Scatter symbol!

The aim of the game Twin Spinner online is to get three matching symbols on one of the ten win lines. Each reel set has four reels and ten win lines. The Crown plays a key role in this special slot title, for it is the Scatter. If it appears three times anywhere on the reels, you’ll land a Mystery Win. Winning combinations begin on the left and run across to the reel on the right. Only the highest win is paid per line. Twin Spinner online is played with and for coins, meaning the stakes you place and the winnings you achieve are in the form of coins. You can determine the value of one coin in the game. The paytable also displays the possible winnings in coins.

Twin Spinner is played with two sets of reels. This means that you can play for two different stakes simultaneously, or spin both reel sets for the same stake. This way, you can play it safe and go for a riskier gaming strategy at the same time. Both reel sets come complete with a coin counter; coins can be transferred from left to right and vice versa.

Get ready for double the fun, for there are two of everything in the special slot Twin Spinner. And that means you’re onto a winner, with twice as many classic fruit symbols and Scatters flying around the reels, ready to line up and land you juicy winnings! 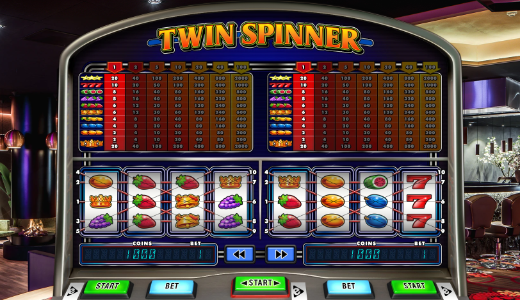