Do you love the land of limitless possibilities? No matter whether you’ve already taken the trip across the Atlantic or only dreamt of it, in Wild Lines: American Eagle you can celebrate the very best the USA has to offer. The first thing that will strike you about this slot is its design: the reels are located on the famous Route 66, and the Eagle (which has three sensational functions) soars above. But it’s the two special features that really increase the excitement... and the chances of winning.

Want to find out more about this game? Then read the following game instructions, which include some useful tips.

Wild Lines: American Eagle is a virtual stepper slot by Greentube with three reels and one win line. In the Free Games feature, however, the number of win lines can increase to eleven. To land winnings in this game, enough matching symbols must stop on the win lines. The Cherries symbol, for example, must appear only once for you to win. But the winnings will be much greater if you get three of them.

There may not be many symbols in Wild Lines: American Eagle, but the cool designs more than make up for that. Moreover, this enables you to maintain a better overview of the action and immediately see whether you have won or not.

The symbols are as follows: Cherries, BAR, 7, the Wheel of Freedom and the Eagle.

The Eagle is the most valuable symbol by far, for it performs several roles. As the game’s Wild, it can substitute for all other symbols (except for the Scatter) to complete winning combinations. On top of that, it can appear as a multiplier to multiply your winnings. And it can even hold its position on the first win line (either on reel one or three) and freeze the whole reel for the next spin.

The Wheel of Freedom is the Scatter in Wild Lines: American Eagle, and when it lands on the middle position of the second reel, it triggers the Wheel of Fortune feature.

The Wheel of Fortune Feature in Wild Lines: American Eagle

The Nudge feature in Wild Lines: American Eagle makes it possible for some symbols to move one position up or down. In other words, the affected reel rotates forwards or backwards, which can help you complete a winning combination. This all happens at random.

What is Wild Lines: American Eagle?

Wild Lines: American Eagle is a virtual edition of a classic stepper slot. The game is played on three reels and one win line. But in the Wheel of Fortune feature, you have the chance to bump up the number of win lines to eleven. Free Games are also waiting for you there. And there’s the Nudge feature too, which you simply have to see in action!

Where can I play Wild Lines: American Eagle?

The popular slot game dedicated to all things American can be played on GameTwist. The online gaming website hosts a huge range of slots that you have to check out. If you like Wild Lines: American Eagle and slots that have an American theme, we recommend playing Silver Trails, Eagle Bucks and Chicago.

The smooth gameplay and simple setup that pay tribute to classic stepper slots make this game stand out. But Wild Lines: American Eagle also comes equipped with new features to make it an unmissable slot highlight. Whatever happens when you spin the reels, you’re set for a varied and entertaining session.

Which symbols in Wild Lines: American Eagle are particularly valuable?

That’s obvious: the Eagle! Why? Because it takes on several important roles: As the game’s Wild, it can substitute for other symbols to help you complete winning combinations. As a multiplier, it can boost your winnings. And if it shows up on the reels with a Padlock, it is held in place for the next spin to increase your chances of winning. 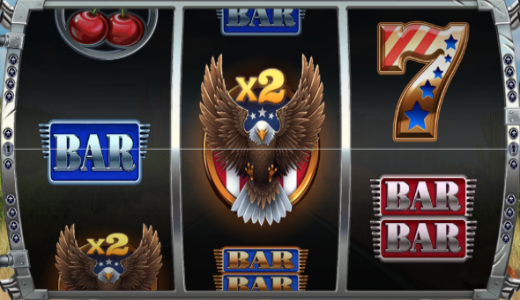