Howdy, cowboy! Feel like a slot adventure in the prairie?

The sun is low, the landscape is bathed with golden light and the wild ranger rides towards the horizon. If you would like to experience this feeling of freedom yourself, then don’t hesitate and play Wild Ranger. Because in this Wild West slot you can spin five reels to your heart’s content,,and with a little luck the right symbol combinations will land on the 20 win lines. Maybe you will even trigger the Wild Ranger Jackpots feature and hit the grand jackpot.

Read up on the most important details of the game in the following game instructions.

The Game Structure of Wild Ranger

Wild Ranger is an online slot game with five reels and 20 win lines. If you get three or more matching symbols running along a win line from left to right, you’ll be on the receiving end of winnings. The Scatter symbol is exempt from this rule. Because it can send winnings your way from any position on the reels.

These Are the Symbols in Wild Ranger

Classic symbols including the Jack, Queen, King and Ace can be found on the reels of Wild Ranger. In addition, this game boasts some symbols that are matched with the slot’s theme: a Glass of Whisky, a Revolver, Coins and a Horse.

The special symbols also go perfectly with the Wild West topic of the slot. The Scatter is represented by a Train. It can score wins in any position as well as trigger Free Games and is therefore very sought-after. The Sheriff’s Star triggers the Wild Ranger Jackpots feature when landing in the right amount and the Ranger acts as a Wild. It can substitute for other symbols (except for the Scatter) to complete winning combinations.

If all reel positions are filled with Sheriff’s Stars you win the grand jackpot. Moreover, you can also crack the minor or mini jackpot or clean up 30 times your stake.

The Free Games in Wild Ranger: How You Get Them

The popular Free Games are also available in Wild Ranger. To bag them at least three Train symbols (Scatter) must land in a round on the reels. You will then receive five Free Games and some giant symbols. The Giant Train symbols bestow three more Free Games on you while the Giant Sheriff’s Star symbol paves the way for the Wild Ranger Jackpots feature.

By the way, Free Games can be triggered again and again provided enough Train symbols appear.

FAQs About Wild Ranger Online: What You Need to Know

What is Wild Ranger?

Wild Ranger is a thrilling Wild West slot. The game comprises five reels, 20 win lines and many different symbols of which some have a special function. The Sheriff’s Star, for example, can trigger the Wild Ranger Jackpots feature and the Train the Free Games feature.

Where can I play Wild Ranger online?

You can play Wild Ranger on GameTwist – the popular online gaming website. You can find many more slots on there that are set in the Wild West and promise plenty of winning bounty. Check out Silver Trails, the iconic slot machine with winning multipliers and a jackpot feature.

Which symbols in Wild Ranger are particularly promising?

The Sheriff’s Star (Scatter) can trigger the Wild Ranger Jackpot feature in Wild Ranger. Free Games can be won with the Train symbol and the Ranger acts as Wild and can substitute for other symbols (except for the Scatter) to complete winning combinations.

Is there a special feature in Wild Ranger?

The Wild Ranger Jackpots feature, of course, because it might give you access to the grand jackpot. Besides this there is also a mini and a minor jackpot. If luck is on your side you could start the Free Games feature and earn several game rounds free of charge. 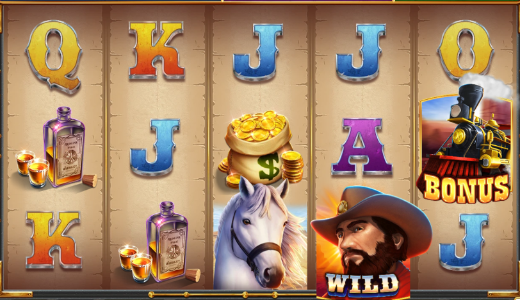