The refreshingly lively fruit machine with a guaranteed vitamin kick!

Ever seen a fruit garden as lush as this? With such delicious-looking fruits that you just want to sink your teeth into? Fruity Splasher, the slot with a six-by-five reel set and a Free Games feature, is a paradise for anyone who loves to treat themselves to something truly tasty. And the best thing is that the fruits on the reels don’t just taste great, but they can also combine to generate winnings for you. Get enough of the same variety and you’ll fill your player account with Twists.

Want to find out more about this game? Then keep reading!

Fruity Splasher is an online slot game with six reels and five rows. But unlike most other slots, this one foregoes traditional win lines. The symbols need only stop in the right quantity on the screen to trigger winnings. The value of your prize depends on the size of your stake: the more you bet, the bigger the rewards you can win. Should several winning combinations be formed in a round, only the highest will be paid out.

The Tumbling Feature in Fruity Splasher

As soon as you spot a winning combination in Fruity Splasher and it has been paid out, the symbols will promptly vanish and leave space for new symbols to fall from above. In this way it’s possible for further combinations to be formed, which would mean even more Twists making their way into your player account.

The Symbols in Fruity Splasher

As the name suggests, the symbols in Fruity Splasher are juicy fruits. Lemons, Oranges, Apples, Plums, Strawberries, Melons, Pears, Grapes and Cherries are all ready to play.

And they are joined by two special symbols – the Bomb and the Rocket – which can explode and clear parts of the reel set. The empty positions are then filled from above, giving you another chance to win.

Then there’s the multiplier symbol, which can multiply your winnings, and the Bonus symbol, which is needed to activate the Free Games feature.

When the Bonus symbol stops on the reels in a round and within a Tumble sequence three times or more, the Free Games feature is triggered. That means at least ten spins on the house in Fruity Splasher in which you can win again. Plus, you can extend your free-spinning fun while the feature is up and running. With a little luck on your side, you can even make the most of the multiplier symbol and watch your winnings grow!

What is Fruity Splasher?

Fruity Splasher is a fruity online slot machine with six reels and five rows. Instead of having to land on predetermined win lines, the colourful fruit symbols in this slot need only appear enough times on the reel set for you to be a winner. This applies both in the basic game and during the Free Games feature.

Where can I play Fruity Splasher?

Fruity Splasher can be played on the popular gaming site GameTwist. In addition to a host of great fruit slot titles, including Sizzling Hot deluxe and Thunder Cash – Juicy Juicy, you can play games from the legendary Book of Ra slot series. Fancy checking them out? Then give the reels of the iconic Book of Ra deluxe and Book of Ra – Temple of Gold a spin.

Are there Free Games in Fruity Splasher?

Yes! As soon as three Bonus symbols stop on the reels of Fruity Splasher in the same spin, the Free Games feature begins and at least ten spins on the house are yours. Further Free Games can be triggered during the feature, and the multiplier symbol can multiply your winnings.

Which of the symbols are particularly valuable in Fruity Splasher?

Aside from the Bonus symbols and multiplier symbols (active only in the Free Games), the two explosive symbols are well worth keeping your eyes peeled for. They come into their own when no further winning combinations are achieved after a Tumble: they explode to clear sections of the reel set, which are then filled by new symbols. 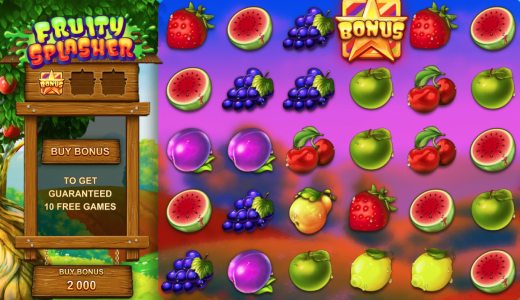