How do you make the perfect magic potion? Find out...

What you concoct on the five reels and up to 1,024 win ways of the magical online slot Manic Potions can deliver impressive results. The blue elixir, for example, generates a random multiplier; the red one makes an additional reel appear on the screen; and the yellow potion encourages the Wild symbols to expand. On top of that excitement, there’s the Lock & Spin Wincreasing feature in which your winnings can be multiplied. Honestly, it’s quite unbelievable what you can achieve with just a few bottles of colourful liquid.

Want to know more about what you can mix up on the reels? Then read the following instructions, which include some very handy tips.

Manic Potions is an online slot with five reels, four rows and up to 1,024 win ways. For you to generate winnings, you need at least three matching symbols to stop along a win line running from left to right across the reels.

Under certain conditions, you can even play on six reels, with five rows and up to 15,625 win ways. And when you do, symbol combinations running from right to left are also valid. But more on that later.

The Symbols in Manic Potions Online

Manic Potions wouldn’t be Manic Potions without a selection of bottles filled with magic elixirs. The red, yellow, green and blue liquids not only look good, but they can also help summon modifiers for you to play with.

The colourful concoctions are joined on the reels by the classic card suit symbols: Club, Spade, Heart and Diamond.

The Wild is one of the special symbols: it can appear on reels two, three, four and five, and it really packs a punch. It stands in for all other symbols (except for the Scatter) and can produce particularly lucrative winning combinations.

The Scatter, which is labelled “Lock & Spin”, can magic up winnings for you from wherever it lands on the reels. And if four or more Scatters stop on the reels in a spin, the Lock & Spin Wincreasing feature begins.

On the look out for an extra thrill or two? Then keep your fingers crossed for four Scatters in a spin. Such a collection of special symbols activates the Lock & Spin Wincreasing feature.

It begins with three re-spins during which multipliers of varying factors can land on the reels. Each time you spot one, the number of re-spins resets to three, giving you further chances to collect even more multipliers.

At the end of the feature, the total bet will be multiplied by the sum of the multipliers. And if every position on the reel set is occupied by a multiplier, the total win will then be doubled.

Re-Spins and Modifiers in Manic Potions

Every time a potion forms part of a winning combination in Manic Potions, a re-spin is automatically triggered and you receive one of four modifiers:

What is Manic Potions?

Manic Potions is an online slot about witchcraft and magic, which is played on five reels and up to 1,024 win ways. The Lock & Spin feature combines with re-spins and modifiers to make this game a thrilling spinning adventure with great chances of winning.

Where can I play Manic Potions?

You can spin the reels of Manic Potions on GameTwist – the hugely poplar German online gaming website. In addition to Manic Potions, you’ll also find a wide variety of further mystical slots, including Faust, Mystic Secrets and Spooky House.

Is there a special feature in Manic Potions?

Yes, with a pinch of luck in Manic Potions, you’ll get to enjoy the Lock & Spin Wincreasing feature. The win multipliers that stop on the reels during this exciting extra can multiply your total stake and trigger re-spins.

Are there modifiers in Manic Potions?

Yes! Every time a potion is part of a winning combination in Manic Potions, a re-spin is automatically triggered and you’ll get one of four modifiers. This could come in the form of an additional reel, expanding Wilds or even a multiplier. 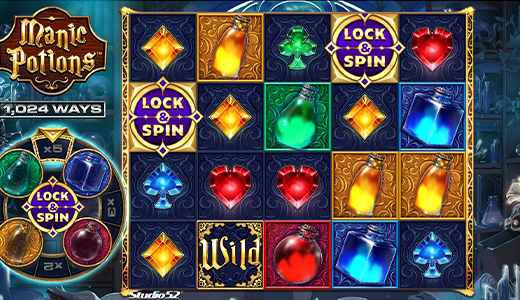