Roll up, roll up for reel power and showstopping chances of winning!

Welcome to Super Circus, the unique big top slot with five reels and 20 win lines. Daredevil spins, stupendous symbols and breathtaking features are all on show in this magnificent game. And a little luck is all you need to be on the receiving end of Free Games, giant symbols and a win multiplier. Simply put, this slot show is magnificently entertaining from start to finish!

Want to make sure you don’t miss a thing? Then take a quick look through our game description and get ready for the action to begin!

Super Circus is an online slot machine from Redline Games with five reels and 20 win lines. If you get three or more matching symbols along one of the win lines, running from left to right, you’ll scoop winnings for your account.

The Symbols in Super Circus

Classic symbols including the 10, Jack, Queen, King and Ace can be found on the reels of Super Circus. However, there are also symbols that perfectly embody the circus theme of this entertaining slot show: Juggling Clubs, Throwing Knives, a Cannon and the Ringmaster himself. And there’s even room on the reels for a few special symbols: the Bonus symbol is the game’s Scatter, which means it can trigger Free Games if it appears enough times; the Firecracker is the Wild symbol, and it can appear on reels two, three and four to substitute for other symbols (except for the Scatter and the Tiger); and with a little luck on your side, you’ll spot the Tiger symbol, which can trigger the thrilling Tiger Spin feature.

Free Games are up for grabs in this circus slot. And the Bonus symbol (the Scatter) is your ticket to accessing them. All you need are three of these symbols to appear on the reels in a regular spin. Manage that and you’ll be automatically granted ten Free Games in which your chances of landing winnings increase significantly.

Further Free Games can be won during the already active Free Games.

Super Circus is also home to a second exciting feature: the Tiger Spins. If you spot a Tiger on both the second and fourth reel in a single spin, the feature will begin. Instead of seeing the usual reel window, you’ll be presented with a scale displaying various win multipliers.

You’ll also see a hoop to the left and right of this scale. With every spin of the reels, you must attempt to fill the hoops with a Tiger symbol. Every Tiger-hoop combo you achieve will move you up the scale, guaranteeing an even bigger multiplier for your stake. If one hoop remains empty, the win multiplier reached will be applied and you’ll be able to continue playing with the second hoop until it also remains empty.

The winnings from both hoops will be added up at the end of the feature, and you will return to the regular game.

What is Super Circus?

Super Circus is an exciting circus slot from Redline Games with five reels and 20 win lines. In addition to a Free Game feature, the slot boasts the Tiger Spin feature that delivers chances of winning you certainly don’t want to miss out on.

Where can I play Super Circus?

Just like so many other entertaining online slots (such as Scat Cat Fortune, Seven Seas Jackpots and Lord of the Ocean Magic), you can play Super Circus on the hugely popular gaming website GameTwist. Check it out now!

Are there Free Games in Super Circus?

Yes, in Super Circus three or more Bonus symbols (Scatters) trigger ten Free Games in which every Firecracker symbol that appears is held in place. Should two them land side by side, they combine to form an extra-big Firecracker.

Which of the symbols in Super Circus are particularly valuable?

The Bonus symbol is the Scatter in Super Circus, which means it can trigger Free Games if it appears enough times. The Firecracker symbol is the game’s Wild, giving it the power to substitute for other symbols (except for the Scatter and the Tiger). Last but not least, the Tiger symbol can, with a little luck, unleash the Tiger Spin feature. 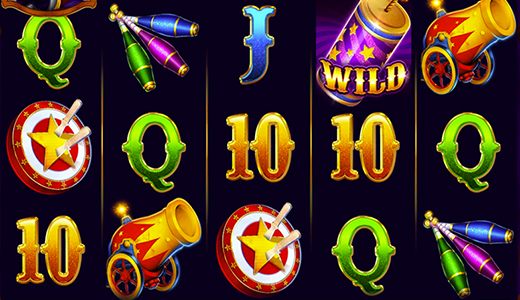